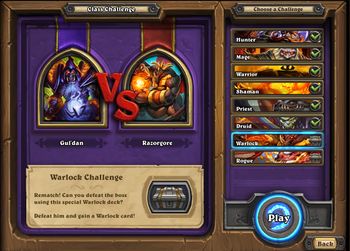 Blackrock Mountain features nine class-specific Class Challenges, with each offering a new and more difficult twist on the adventure's encounters, tailored to that class.

Class Challenges use predetermined decks, which are not directly revealed to the player at any point. Class Challenge decks feature 30 cards in total, but like Arena decks are not subject to the 2-copies-per-card limit found in constructed play.

Completing each Class Challenge will reward the player with two copies of a new class-specific card for that class. Each Class Challenge features the related card, as well as often including other cards from Blackrock Mountain, some of which, at the time of the Challenge's release, were not yet available for players to collect.

Class Challenge decks usually have specific themes, and often serve to specifically demonstrate how the related card can be used to great effect, such as by including several other cards with which the card has good synergy. This synergy often extends to the hero powers and cards used by the Challenge's boss.

Class Challenges do not have Heroic mode versions.

Class Challenges are not immediately available, but must be unlocked through completing the corresponding wing of the adventure.

With a pre-made deck full with high cost, high power minions, Coren's hero power Pile On! will frequently and spectacularly backfire upon himself. Play aggressively to secure an early win, before the combo of Dark Iron Bouncer and Brawl can wrest board control away.

Using only 30 copies of Unstable Portal, the player must use the random minions generated by the spell to defeat Grimstone and his deck, which is filled with legendary minions.

As the creatures you will have access to are entirely random, suggesting a strategy is tricky. However, victory should be easy, as all your creatures are 1 mana more efficient, and since your entire deck is composed of spells, the enemy summoning Millhouse Manastorm will be disastrous for them.

This is a very easy match, as your deck is constructed to turn Garr's hero power Magma Pulse against him. Frothing Berserker can singlehandedly win you the game if Garr has no removal for it, as his Firesworn-laden side of the board will constantly trigger its Attack boost.

As with the regular Garr fight, manage the Firesworn's health totals so they do not all die on the same turn.

The challenge provides you a deck similar to regular control shaman, but with much more Overload cards. You can take advantage from this by purposely planning the usage of your mana in order to prove Baron Geddon from using his Ignite Mana. Besides that you can use Lava Shock to cleanse the downside of Overloading too much.

Don't waste too much mana using Totemic Call, as it not only slows down your tempo, but you may also risk Geddon casting Living Bomb on 0-Attack Totems. However you can get over it by using your Flametongue Totem or Rockbiter Weapon to sacrifice your Totems. Geddon does not have AoE removal beside Living Bomb so try to play it more aggro.

As long as you make sure you use up all your mana every turn, Baron Geddon shouldn't be problem.

With high cost legendaries reduced to 1 mana due to the hero power of General Drakkisath, manage your card play order to control the board and beat him down. It is wise to mulligan for minions which have great threat on their own in order to play them as fast as you can, together with a few removal options to aid it.

Although a couple of Twisting Nethers might wipe your board if you were hoping to combo up with some cards, you can bring one of your minion back to life with Resurrect. Note that Boom Bots, Leper Gnomes, Whelps and Burly Rockjaw Troggs, which are summoned by your minions, can also be resurrected. Therefore it is important to choose a suitable order of playing certain minions in order to make the most of Resurrect.

This fight is primarily designed to showcase Volcanic Lumberer's in-hand effect, with its cost reduced by the deaths of other minions. The deck is composed of cheap minions which summon other minions. By trading these into the enemy minions, the player can summon Volcanic Lumberers exceptionally cheaply, allowing them to gain good board advantage. Savage Roar provides an alternate strategy, turing the druid's large board of weak minions into a massive source of damage.

For both these synergies, try to fill the board with as many minions as possible, and then either use Savage Roar to deal huge damage to the boss, or trade them into enemy minions (with or without Savage Roar) in order to summon one or more Volcanic Lumberers. Aiming for these strategies should allow you to triumph fairly easily.

The warlock Class Challenge sees the player battling Razorgore the Untamed in order to obtain Demonwrath.

The deck consists almost exclusively of Demons, plus synergy cards like the aptly named Demonfire, Demonheart and Demonwrath. The deck is similar to Zoolock, but has strong Demon synergies and big cards like Mal'Ganis and Lord Jaraxxus to ensure dominance throughout the match.

Aim to control the board, prioritising destroying Razorgore's eggs each turn. This will allow you to slowly build up your forces, and before long you will have a large presence with which to finish off Razorgore.

The deck is a dream mill Rogue impossible to create in constructed. The only minions in this deck are Edwin VanCleef and Dark Iron Skulker, therefore you should use your 4 Gang Up spells on your opponent's minions. The best choices are Twilight Drake or Goblin Sapper. It may seem like a good idea to get rid of your full hand and play a boosted Edwin VanCleef but it will get Naturalized immediately, so it is generally a fairly useless card.

Don't hesitate to use Preparation before your cheaper spells since you have 6 of them and there are only 4 spells that cost more than 2 mana. Keep in mind that you will get at minimum 3 cards per turn, so make sure you have no more than 7 cards in your hand by the end of your turn. You should also expect your opponent to play Naturalize when you have Edwin VanCleef or some Giants on the board, so remember that you will draw 2 more cards in that case.

Maintaining board control won't be a big problem either. Use his minions against him and try using Backstab or Dark Iron Skulker on everything he puts on the board. You may also want to save some Sap, Vanish or Assassinate for his 4 Giants (likely even more due to Gang Up).

Nothing tricky here. This deck runs 5 Dragonkin Sorcerer so you should know what you're supposed to cast your buffs on. You don't have that many of them, but if your Chromaggus doesn't end up on the bottom of the deck you should get some free copies.

Take advantage of your opponent's special Mechs, save your Lay on Hands until Electron shows up, and try playing Consecration while Arcanotron is out. Then kill them before Omnotron has a chance to use them.

As in the Normal mode encounter, Omnotron's hero power changes the first four times he uses it, causing him to summon different minions. The boss Mechs are summoned on the following turns:

From turn 9 on the boss' hero power becomes Activate!, allowing him to randomly summon one of the above minions for only 4 mana, but he no longer automatically uses the hero power, allowing him better strategic choices.