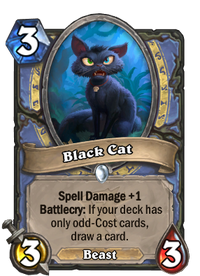 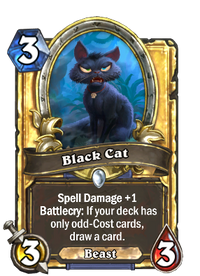 Spell Damage +1
Battlecry: If your deck has only odd-Cost cards, draw a card.

Black Cat is a common mage minion card, inducted into the Hall of Fame set, formerly from The Witchwood set.

Black Cat can be obtained through crafting only.

Without its bonus effect, this card is equivalent to Soot Spewer but with the Beast tag, which is generally not playable in Constructed. Bloodmage Thalnos provides roughly the same effect for 1 less mana.

With the Battlecry, this card works as a cheaper Azure Drake, a staple in many old Mage decks. Its versatility keeps it a good option for Baku the Mooneater decks.

The Witchwood's growing influence drives even the redoubtable citizens of Gilneas to fearful flights of fancy. Uneasy townsfolk share bizarre stories of black cats with knowing eyes, and giant moths that peer into windows during the dead of night. Stranger still, they all seem to share the same horrid dream, night after night: a feeling of unspeakable dread as they watch huge, spectral fangs devour the moon.[1]

Commentary: As they were complementary to the Even-Odd mechanic that Baku and Genn introduced, Gloom Stag, Black Cat, Glitter Moth, and Murkspark Eel will also join the Hall of Fame.