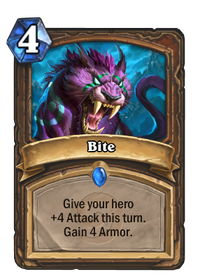 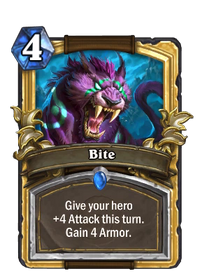 Give your hero +4 Attack this turn. Gain 4 Armor.

Bite is a rare druid spell card, from the Classic set.

Bite can be obtained through Classic card packs, through crafting, or as an Arena reward. Regular Bite can also be obtained through the Highest Rank Bonus chest at the end of a Ranked season, or as a first-time reward for first time reaching Silver 10 or Gold 10 in Ranked mode.

A stronger version of Claw, Bite should most often be used for minion removal. The Attack it provides is enough to allow the Druid to deal with mid-sized minions on his own, and the Armor can usually block almost all of the damage. If used in conjunction with the Shapeshift hero power, the druid will be able to handle minions of 5 health and protect from 5 damage. In a pinch, this spell can be used to deal 4 damage directly to the opposing hero.