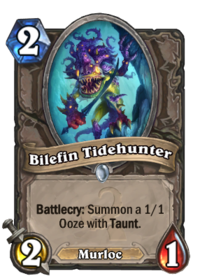 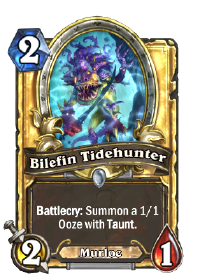 Battlecry: Summon a 1/1 Ooze with Taunt.

Bilefin Tidehunter is a common neutral minion card, from the Whispers of the Old Gods set.

Bilefin Tidehunter can be obtained through Whispers of the Old Gods card packs, or through crafting. 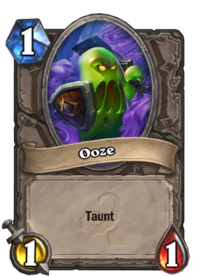 Bilefin Tidehunter is very similar to its spiritual predecessor Murloc Tidehunter, the only difference being the summoned minion is a Taunt, rather than a Murloc.

The Ooze minion Bilefin Tidehunter summons is a more versatile card than the Murloc Scout that Murloc Tidehunter summons. A cheap Taunt can be leveraged by a wide variety of decks, such as a Paladin deck with Steward of Darkshire or a Zoo deck that wants to both summon many minions quickly and protect its board. The Murloc Scout meanwhile is useful in a Murloc deck, where it can interact with cards like Murloc Warleader and Coldlight Seer.

This is the corrupted version of Murloc Tidehunter.

There are murlocs called Blindlight Bilefins who appear in Drowned Sacellum within Blackfathom Deeps. The dungeon is known by its corrupted shrines and temples devoted to the Old Gods, and is run by the Twilight's Hammer, which explains appearance of the bilefin within the Whispers of the Old Gods.

Based on this it seems likely that the title 'Bilefin' is not the name of a murloc tribe (since the Blindlight Bilefins are already members of the Blindlight tribe), but rather a title of some kind borne by certain corrupted murlocs.

The Drowned Sacellum is a submerged shrine located in a cavern within Blackfathom Deeps. The ruined sacellum lies in a pool of saltwater and is partially overgrown with starfish. Murlocs and makrura live side by side in the area, thriving in the wet, gloomy environment. Like most of Blackfathom, the cavern ceiling is littered with thick tree roots, where dark wisps provide an eerie illumination.

The Drowned Sacellum is the first room players reach after the instance portal of Blackfathom Deeps. Access to the Pool of Ask'ar is gained by jumping across the ruined surface of the sacellum, which some players find difficult. 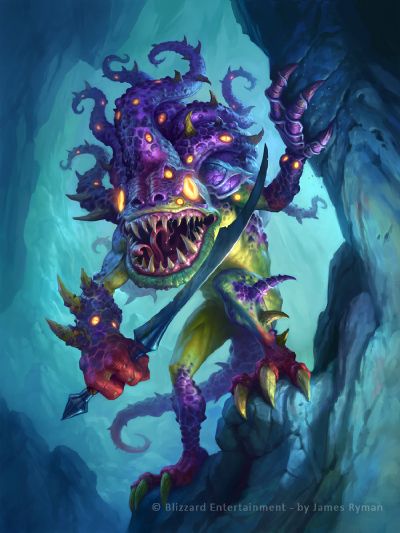