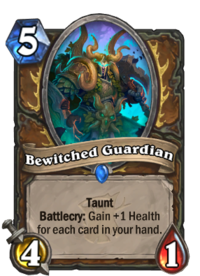 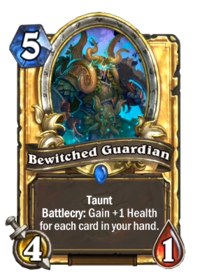 Taunt
Battlecry: Gain +1 Health for each card in your hand.

Bewitched Guardian is a rare druid minion card, from the The Witchwood set.

This minion is a lot like Twilight Drake, but with Taunt. As such, it accommodates with other hand size based cards like Wispering Woods and Ferocious Howl.

One distinct advantage Bewitched Guardian has over Twilight Drake is that it's not a target for Oaken Summons, whereas Twilight Drake can get Recruited from it as a 4/1.