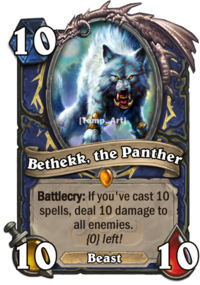 Bethekk, the Panther was a legendary shaman minion card originally planned to appear in Rastakhan's Rumble but which was cut prior to release.

This card was conceptualized at a time when the shaman team in Rastakhan's Rumble were planned to be themed around Bethekk, the panther loa. However, Team 5 ultimately decided to shift the shaman team to instead be themed around Krag'wa, the Frog as they felt that they already had a lot of big cats with Halazzi and Shirvallah and frogs were "a little bit sillier and funnier than panthers". On the gameplay side of things, the effect that was designed for Bethekk was deemed too extreme, and Krag'wa was designed to instead have a more midrange-focused card-generating ability.[1]

Bethekk, the panther, is one of the loa in the troll pantheon. Like the other loa of the Gurubashi tribe, Bethekk was held in Zul'Gurub against her will during the time when the Hakkari were attempting to resurrect Hakkar the Soulflayer.

She is represented on Azeroth through a champion of her choosing, a position held by High Priestess Kilnara. Kilnara is the sister of the previous champion, High Priestess Arlokk, who was killed several years earlier prompting Bethekk to choose her sister as her next mortal champion.