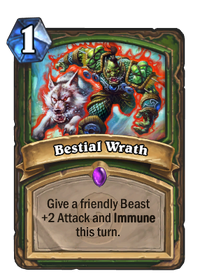 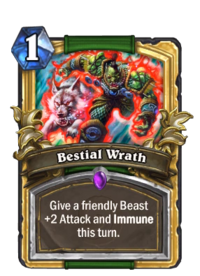 Give a friendly Beast +2 Attack and Immune this turn.

The seething wrath is just beneath the surface. Beneath that is wild abandon, followed by slight annoyance.

Bestial Wrath is an epic hunter spell card, from the Classic set.

Bestial Wrath can work well in Beast Hunter decks. It is very useful for buffing up one of your minions to take down a large threat on your opponent's side of the field without losing your own minion. Make sure you play enough Beasts in your deck to cast it reliably, and remember that both effects of the +2 to Attack and Immunity only last a single turn, not just the Immunity.

Bestial Wrath is a Beast Mastery hunter ability in WoW. It increases a pet's damage by 20% for ten seconds and has a one minute cooldown. However, one must improve the ability using a glyph in order to for it to grant the 'unkillable' effect for your pet found in Hearthstone. It also makes you and your pet get out of any crowd control effect. Serves as a second PvP trinket. 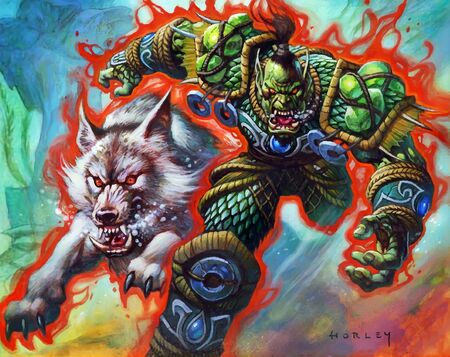