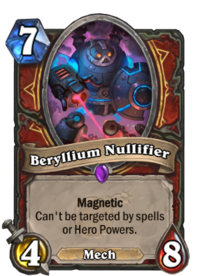 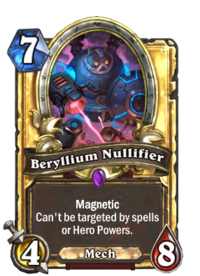 Magnetic
Can't be targeted by spells or Hero Powers.

Why Beryllium? Because it's hard to spell.

Beryllium Nullifier is an epic warrior minion card, from The Boomsday Project set.

This card is fairly weak when played on the field, but provides a monstrous buff when Magnetized to another Mech. Alternatively, you can play Beryllium Nullifier on the board the turn before you play another Magnetic minion, almost ensuring you'll still have a target around.

Beryllium Nullifier is typically not worth the deck slot, but very powerful when created by cards like Omega Assembly or Delivery Drone.