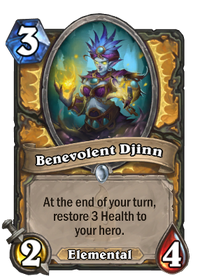 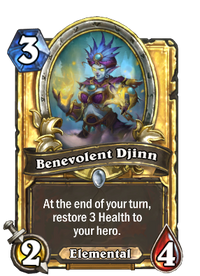 At the end of your turn, restore 3 Health to your hero.

Benevolent Djinn is a common paladin minion card, from the Kobolds and Catacombs set.

Benevolent Djinn can be obtained through Kobolds & Catacombs card packs, or through crafting.

Summon
The first wish is free.

Attack
As you desire.

Like the Djinni of Zephyrs, this minion is a djinn.

A djinn is a type of powerful air elemental that can be found in Skywall. They made their first appearance during World of Warcraft: Cataclysm.

Most djinn in World of Warcraft are powerful lieutenants of Al'Akir, though a minor one has also appeared trapped in the Magical Brazier inside the Vortex Pinnacle. A legend among the tol'vir tells of a wicked djinn whom the Ramkahen sought to destroy. In an attempt to prevent his own death, the djinn tried to transfer his spirit into the body of a monkey. He was slain right in the middle of the transference, and only a fraction of his essence had moved over - only enough to possess the monkey's paw.

Notably, the Benevolent Djinn is the first known example of a female djinn.