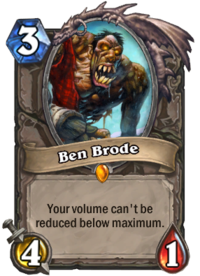 Your volume can't be reduced below maximum.

Ben Brode is a former Blizzard employee and member of Team 5 who served as Game Director for Hearthstone[2] until his departure from the company on April 20, 2018.[3] He is currently the Chief Creative Officer at the game studio Second Dinner.[4] Brode is featured in the credits card of the same name.

As one of the game designers for Blizzard Entertainment's Hearthstone™: Heroes of Warcraft™, Ben Brode [was] involved in all aspects of the design, including core gameplay design, card powers, balance, artwork selection, programming, and writing.

Brode joined Blizzard Entertainment in 2003, and during his tenure has served in numerous roles throughout the company. His first role was as a tester on Warcraft III, followed by a position in quality assurance on World of Warcraft®. Before joining the Hearthstone team, Brode was part of Blizzard’s creative development department, in charge of licensed products.

In his free time, Brode stays true to the rap game as an MC and beatboxer.[5] 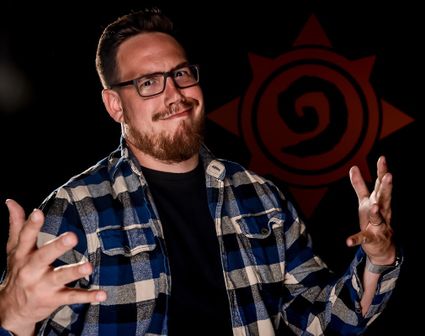 Brode started his Blizzard career as a "night crew game tester".[3][6][7] In 2002 Brode was working part-time delivering pizzas, and a friend of Brode's who was working at Blizzard in night shift Q&A convinced the team to order from Brode's pizza firm, allowing Brode to make connections within the team and eventually get a job as a night shift game tester for Warcraft III: The Frozen Throne and later QA on World of Warcraft.[8][9] Brode "loved the job", got involved in testing the level editor and eventually began making his own maps for Warcraft III, which led him to learn about game design.[9][10]

Brode later worked on the World of Warcraft Trading Card Game from its "very beginning" until 2008, when Team 5 was created and work on Hearthstone began.[11][12][13] Brode describes this as "how I ended up on the Hearthstone team",[14] stating, "I caught the attention of [then executive producer Rob Pardo] and when they spun up Team 5, I got in!"[10]

Brode appears to have been one of the first members of Team 5, describing the team as having had "maybe" 2 members when he joined.[15]

Early in the game's development, prior to the beginning of prototyping, deadlines for another Blizzard project caused all of Team 5 except Eric Dodds and Brode to be reassigned to that game.[16] This isolation allowed the two designers to work in an even more focused way, with only the two of them to settle prototyping decisions, and were able to rapidly progress through myriad design iterations.[16] The two went on to establish the core game still found in Hearthstone today.[16]

For most of the game's initial development, Brode and Dodds were the sole designers regarding card changes and balance. Brode was also responsible for choosing the card art for all cards.[17]

Describing himself as "mostly the guy who heads up content design",[18] up until Whispers of the Old Gods Brode was responsible for initial card design,[19][20] and would sometimes also program prototypes of new mechanics,[21] as well as working "a lot" with the dialogue and voice actors for the game's soundbites and sound design.[22]

At some point in 2015, Brode attended a Design Summit, an event internally hosted by Blizzard every few years where designers from around the company get together and share ideas. Brode gave a talk about various design lessons he had learned from improvisational comedy, stating that he had been in an improvisational comedy group "a long time ago".[23]

In late 2015 Brode was promoted from Senior Game Designer to Lead Designer.[24][25] In November 2016 his title changed again to Game Director (a title previously held by Eric Dodds) although Brode had already been filling the role for around a year.[2][26][27][28] Brode was now less involved in initial design and card creation, with more of a focus on "helping guide teams" and "leadership and direction stuff", but was still "very involved" in the overall design process.[29][30][31][32]

Aside from his work on the game itself, Brode was known for being active on Twitter and reddit, where he could often be found discussing the game with players. Brode was also the host of the Designer Insights video series, discussing current game design issues with the community. By far the most communicative member of the development team, Brode rose to prominence during the game's beta, quickly becoming the public face (and voice) of the Hearthstone team.

In March 2017, in response to a petition on reddit asking him to "sing a song" for the upcoming Journey to Un'Goro, Brode released "Un'Goro: The Journey", a video featuring himself rapping, on his personal YouTube channel.[33][34] Within a few hours the rap's reddit post had become the all-time most upvoted post on /r/Hearthstone,[35][36] and soon the number one post on all of reddit at that time.[37] The rap quickly saw a number of remixes from community members, setting Brode's voice to music ranging from hip hop and synthpop to the internet phenomenon "We Are Number One" and even tech metal, as well as overlaying Brode's rap over the original cinematic. Brode composed, performed and recorded the rap himself without assistance from other team members,[38] taking him about 90 minutes to write.[39] Brode states that he had been rapping "on and off" for 18 years at the time.[40]

During the initial announcement of Knights of the Frozen Throne, players were quick to notice the lack of a song in the expansion's trailer, prompting the creation of a new reddit petition asking Brode to once again perform a song. On July 31st, Brode released the rap video "Ben Brode - ARTHAS" on his personal YouTube channel, telling the story of how Arthas Menethil became the Lich King by recounting the events of Warcraft III: Reign of Chaos in rap form.[41][42] Brode created the video in his home during his free time, taking about 20 hours to write and 40 hours to record and edit.[43][44] He wrote the lyrics to the rap by himself.[45] In the YouTube video's description, Brode extends special thanks to all of Team 5, and especially Andy Brock for mixing the soundtrack.[46]

On April 20, 2018, Brode announced that after 15 years at Blizzard and almost 10 years of working on Hearthstone, he would be departing from Team 5 and from Blizzard to instead help start a new company, citing a desire to be more directly involved in the creation process after his position at Blizzard became more focused on direction than actual design.[3][47] He later elaborated that he hadn't worked directly on Hearthstone card sets for a long time, and that his job during his last 2 years at Blizzard had mainly consisted of granting approval to the developers who were "actually doing stuff".[48] On July 12, 2018, the company Brode helped start was unveiled as the game studio Second Dinner,[49][50] with Brode as Chief Creative Officer.[4] 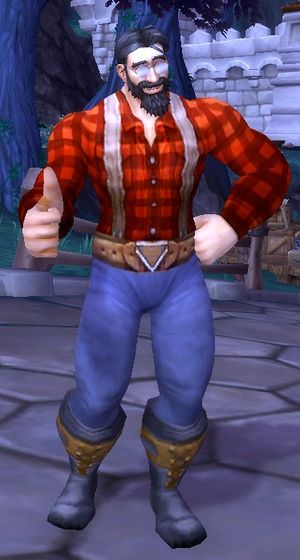 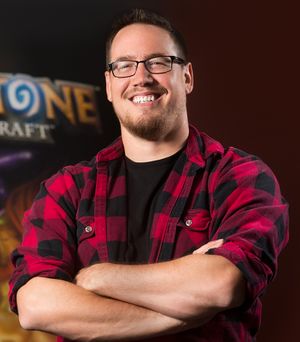