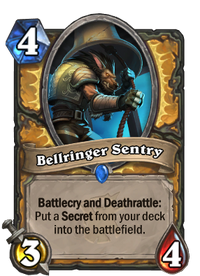 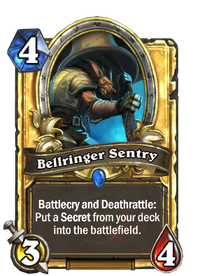 Battlecry and Deathrattle: Put a Secret from your deck into the battlefield.

Who are you? Eh, none of my business.

Bellringer Sentry is a rare paladin minion card, from the The Witchwood set.

Bellringer Sentry can be obtained through The Witchwood card packs, or through crafting.

The Bellringer Sentry is a central card in paladin decks focused on Secrets. He combines the deathrattle of the Mad Scientist with a downplayed version of the notorious Mysterious Challenger, along with decent stats for it's cost. By taking secrets directly out of a player's deck, it gives greater chance of drawing more valuable cards, or ones that synergize with secrets already being on the field. These include Sunreaver Spy, Mysterious Blade, and Commander Rhyssa.

This card is best played early on, as both it's battlecry and deathrattle will be useless if there are no more secrets in the player's deck in the late-game.

Bellringer Sentry's flavor text is a reference to Mysterious Challenger's summoning quote, "Who am I? None of your business."