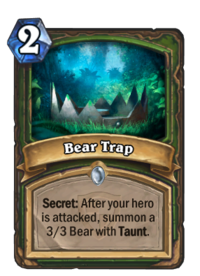 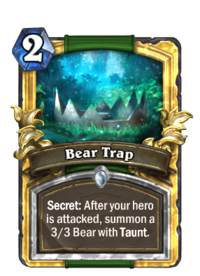 Secret: After your hero is attacked, summon a 3/3 Bear with Taunt.

Bear Trap is a common hunter spell card, from the Grand Tournament set.

Bear Trap can be obtained through The Grand Tournament card packs, or through crafting.

Although not specifically named in the card text, this Secret summons an Ironfur Grizzly.[1] 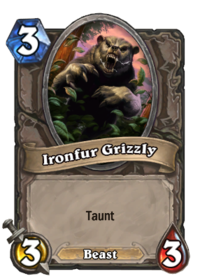 A strong card for midrange and control hunter. This is a 3/3 Taunt for 2 mana (that comes out slow) that can give you time to regain board presence. While it doesn't block the triggering attack itself, the Taunt can prevent further attacks. Note that if a player plans to attack with several minions that turn, the first will succeed; but this will trigger the Trap, meaning they may be forced to trade their other minion/s. Order of attack can therefore be very significant when testing for Bear Trap.

Bear Trap's comical design (see Trivia) is distinctly Hearthstone. However, Bear Trap was first a card in the World of Warcraft Trading Card Game, albeit with a far more conventional effect. 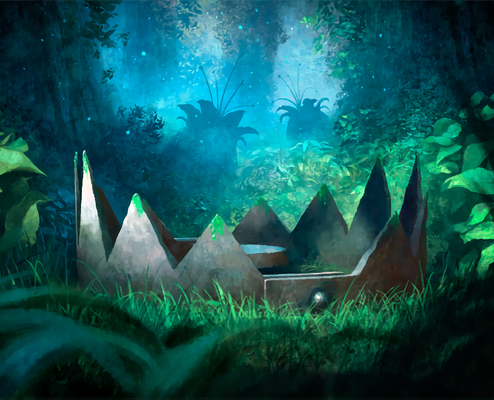