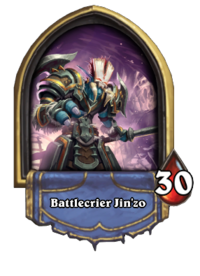 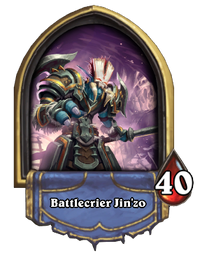 When he calls in the troops, they listen. Twice.

Battlecrier Jin'zo is a boss that can be encountered during the Dungeon Run.

Battlecrier Jin'zo relies on the fact that his battlecry minions trigger with his hero power. Thus, his main strategy will always be to take control of the board and beat you down. One advantage you have on you side is that his hero power triggers for you too, so you can turn it against him. Should you lack battlecry minions, survive till the late game until you have enough mana to deal with him. Do this by gaining control of the board before he does. Trade as much as you can before you are comfortable to go face.

In the late game, though, Jin'zo's strategy is to mill you out with doubled battlecries from Coldlight Oracle before setting two Mines in your deck with Iron Juggernaut, which is tantamount to an instant death if you're on medium to low health by then. He also has Shield Block and Bring It On! to get a large amount of armor to delay aggressive players and even weathering out the inevitable fatigue damage. His increased draw power during the match, though, means he's likely to enter fatigue before you do. Once he's run out of minions to play at that point you've pretty much won if you've survived his Juggernaut's mines.

Battlecrier Jin'zo
This is not time for talking! This is the time for CRYING!

Battlecrier Jin'zo is unique to hearthstone. He is a troll who commands several troops and is very good at rallying them.

Trolls (collectively referred to as trollkind) are a diverse sapient race that can be found in every part of Azeroth. They are one of the earliest non-Titanforged races of Azeroth. There are several subspecies of troll, with the Zandalari being the progenitors from whence all other trolls came.