Battle for the Crater 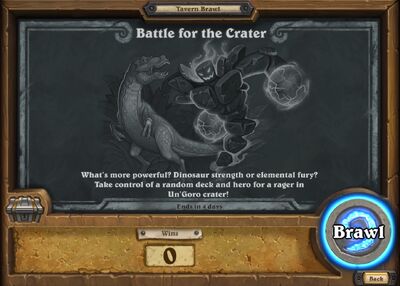 "What's more powerful? Dinosaur strength or elemental fury? Take control of a random deck and hero for a rager in Un'Goro Crater!"

Battle for the Crater is a Tavern Brawl. It debuted on August 2nd, 2017. For exact times, see the schedule.

Battle for the Crater is played exclusively on the Un'Goro battlefield.

This Brawl sees players competing with randomised pre-made decks themed around either Beasts or Elementals, mainly from the Journey to Un'Goro expansion. Upon queuing for the Brawl, players are assigned to a random class and given a randomised deck filled with either Beast or Elemental minions as well as a number of class spells. One player will always be given a Beast deck, while their opponent is granted an Elemental deck. The minions can come from any class, while the spells are always from the class the player was assigned to.