For the frindly encounter in The Dalaran Heist, see Bartendotron.

Bartendotron is a retired hero that the player could pick in the Battlegrounds game mode. 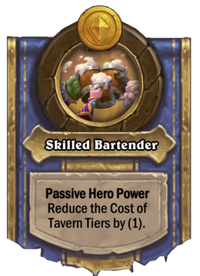 While the actual coins saved by Bartendotron over the course of a game are negligible, the cheaper Tavern upgrades allow him to easily rush for higher tiers. This gives him access to stronger minions than the competition and also gives him the first choice of high-tier minions, making them easier to get for him and reducing their availability to his opponents. Bartendotron needs to abuse these advantages to snowball into a win, as once his opponents start catching up in Tavern tier in the late game, he's effectively left without a hero power.