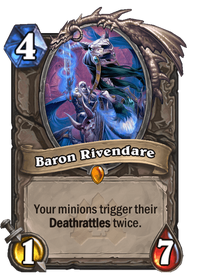 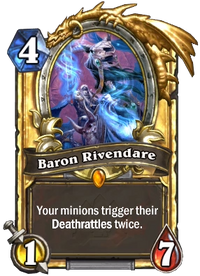 Your minions trigger their Deathrattles twice.

There used to be five Horsemen but one of them left because a job opened up in the deadmines and the benefits were better.

Baron Rivendare is a legendary neutral minion card, from the Naxxramas set.

Regular Baron Rivendare is obtained by completing the Military Quarter wing of Curse of Naxxramas.

As a Wild format card, both regular and golden versions of Baron Rivendare can also be crafted for the following amounts:

Just as it seems, Baron Rivendare is inteneded to use in a Deathrattle focused deck. Cards such as Feugen and Stalagg, Sneed's Old Shredder, and Silver Vanguard are all minions which work well when paired with Rivendare. Note that Rivendare would also affect cards such as Play Dead and Feign Death, which makes it easier to utilize Rivendare's ability without killing off friendly minions. Rivendare also serves as a Soft Taunt, as it provides a bonus with great potential. When playing Rivendare, it should be made sure that it will not be easily removed, or when it can be easily removed, to utilize Rivendare's effect the turn he was played. As Hunter, Necromechanic is a substitute for Rivendare and is widely considered to be more powerful, as it has 2 more attack and is therefore more favorable when trading.

With 7 health and 1 attack, Rivendare is also a valuable target for Divine Spirit and Inner Fire, and can pull off unexpected wins because of the opponent's reluctance to clear Rivendare off the board when its effect cannot take significant impact.

Summon
The Scourge will consume you!

Attack
Lambs to the slaughter!

Kel’Thuzad’s royal guard can be found in the Four Horsemen, each with their own twisted powers at their disposal: Lady Blameaux is a master of the shadow, able to drain the essence of life from those she encounters; Thane Korth’azz controls the destructive power of fire, and can even call forth fiery meteors from the skies; Sir Zeliek was once a paladin, so powerful in life that he can still wield the Light in death; and Baron Rivendare, once a friend of Kel'Thuzad, now continues to serve his old comrade in death with his corrupting powers and skeletal Deathcharger.[6]

Baron Rivendare
Baron Rivendare is a powerful death knight in the service of the Lich King. Originally ruling over the city of Stratholme for the Scourge, he now leads the Four Horsemen of Naxxramas in place of Highlord Mograine.

The Four Horsemen
"The most powerful death knights within Naxxramas are the four horsemen. They represent the pinnacle of Kel'Thuzad's guard. The first, Thane Korth'azz, holds the power of flame. The next, Lady Blaumeux, calls forth the power of shadows, drawing the souls of the living into the voracious embrace. Sir Zeliek, a paladin in life, so strong in his faith, that even in undeath, the power of the light still heeds his call, smiting his foes in battle. The final death knight, Lord Mograine, was the finest warrior that the death knights had ever seen. However, after the events of Azeroth, he vanished without a trace. Kel'Thuzad has appointed Baron Rivendare in his place."
- Commander Eligor Dawnbringer