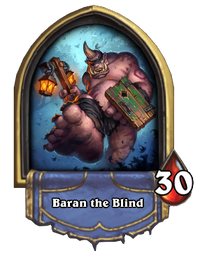 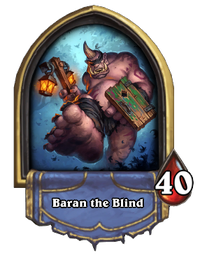 Baran the Blind is a boss that can be encountered during the Monster Hunt.

Keep his minions at bay. Try using power minions to kill his with one hit. The lower you can keep his armour the better. Use your cannons to help you with this.

It is time to see what your bloodhounds can do. If you have best synergy, use it on a blood hound to kill an enemy and use your other minions to keep his armour low.

Keep dropping minions on the ground. Use your minions to lower his armour while using your spell cards to kill his minions. Depending on the situation, you may have to swap strategy.

Through a combination of cards, make sure to kill his minions while also keeping his are armour low. 2 or lower is best.

Hagatha the Witch
Baran was such a gentle soul. Alas, I needed his eyes.

Baran the Blind
Who's there? I can smell you!

Baran the Blind
Keep talking and I will keep stepping!

On an enemy minion

On a friendly minion

Baran the Blind
You never saw it coming. Neither did I.

Baran the Blind is original to hearthstone. He's an ogre whose eyes have been gouged out by Hagatha. The reason is unknown, although she claims she "needed them".