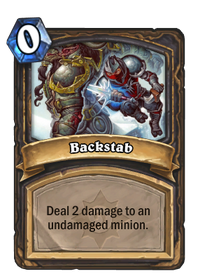 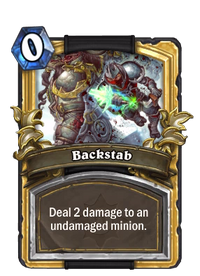 Deal 2 damage to an undamaged minion.

It's funny how often yelling "Look over there!" gets your opponent to turn around.

Backstab is a rogue spell card, from the Basic set.

Two copies of Backstab are automatically included in all players' collections upon unlocking the rogue class.

Two Golden copies of Backstab are a reward for raising a rogue to levels 36 and 38.

Backstab is uncraftable and cannot be crafted or disenchanted.

Backstab is an excellent card, providing a means to remove a 2 or 1 Health minion at no mana cost, deal additional damage to a larger minion at full Health, or set up a Combo.

While on its own it provides no card advantage, being merely direct removal, Backstab's zero mana cost allows it to serve as an instant tempo boost, killing an opponent's minion on the same turn the rogue plays a minion of her own. Furthermore, it can be used to set up one of the rogue's many Combo cards without worrying about mana constraints.

Backstab is commonly used for early game removal, as an answer to cheap and aggressive minions played in the first few rounds.

"In the war between the Horde and the Alliance, grudges are taken to the hilt."

In World of Warcraft, Backstab is an ability available to rogues who have specialized in Subtlety. It is a hard-hitting move that can only be performed when not in front of your enemy and only works with a dagger in the main hand.