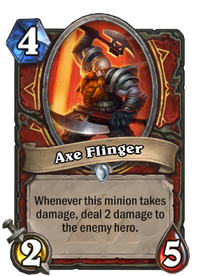 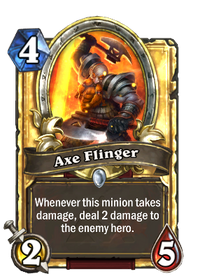 Whenever this minion takes damage, deal 2 damage to the enemy hero.

Once a lowly "Stick Flinger", he's been relentless on the path to his ultimate dream: "Tauren Flinger".

Axe Flinger is a common warrior minion card, from the Blackrock Mountain set.

As a Wild format card, both regular and golden versions of Axe Flinger can also be crafted for the following amounts:

This minion essentially trades Attack for its triggered effect, potentially dealing repeated damage directly to the opponent. Its 5 Health allows it to withstand several hits without dying.

This card has obvious synergy with self-damaging effects like Cruel Taskmaster and Inner Rage, as well as AoEs like Whirlwind and Death's Bite. It may be particularly effective in combination with Bouncing Blade, potentially allowing it to deal 10 damage to the enemy hero in a single turn. Similarly to Acolyte of Pain, the player may wish to inflict damage upon this minion as slowly as possible; but still to ensure that damage is inflicted. Special synergies aside, using it to attack 1 Attack minions will allow the player to make the most of its effect. If available, Health-increasing and healing effects will be very useful for extending its usefulness, with Rampage probably being the simplest and best choice available to a Warrior.

When countering this card, try to remove it in a single attack, or better still using a Destroy or Transform effect, or simply Silence it. It may be worth biting the bullet and removing it as early as possible, before the controlling player can activate its effect multiple times.

Strong, stubborn, and stalwart, the heat of Blackrock Depths has forged the Dark Iron Dwarves into singe-proof juggernauts. Able to take an immense amount of punishment, many of the minions that inhabit Blackrock Depths can both dish out their fair share of pain, or turn inflicted damage into impressive beneficial effects.[2] 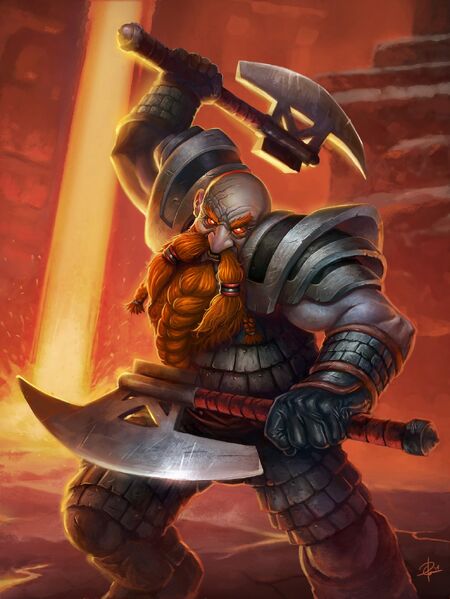