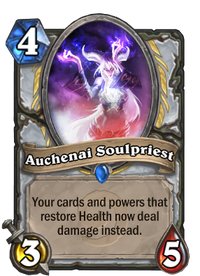 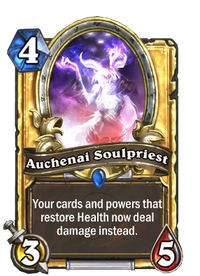 Your cards and powers that restore Health now deal damage instead.

The Auchenai know the end is coming, but they're not sure when.

Auchenai Soulpriest is a rare priest minion card from the Hall of Fame set, formerly from the Classic set.

Auchenai Soulpriest is a very interesting card strategically with the ability to turn the tables in a tough match by changing the priest's many healing abilities into strong damaging spells.

A common use of this card is in combination with Circle of Healing to deal 4 damage to all minions, acting as a very effective board wipe. This effectively provides the effect of a Flamestrike for just 4 mana, but will damage the priest's minions too, reducing the Soulpriest to 1 Health. Unless Silenced, the priest will also be unable to heal the Soulpriest due to their healing effects now dealing damage (although they can still use effects like Power Word: Shield), which means she will often be destroyed next turn. The combo acts to clear away enemies, with the casting priest usually having no other minions on the board at the time, and can be very useful for allowing priests to survive into the late game against more aggressive decks.

The Auchenai Soulpriest can also trade efficiently if played on turn 6 or later, where it can allow the priest to immediately kill a 2 health minion using Lesser Heal.

Very much like a mage, a priest with Auchenai Soulpriest can use his own Hero Power to damage an Acolyte of Pain and draw cards from it, though unlike a mage he will not normally be able to do so more than 2 times.

Be careful with Auchenai Soulpriest and automatic healing effects such as Lightwell. In this case, at the start of the turn the Lightwell will target a damaged friendly character and deal 3 damage to them. It is also worth mentioning that Holy Nova will damage your minions instead of healing them while an Auchenai Soulpriest is active on your side.

If you manage to get an Ancestral Healing out of random card generation, it can be used to destroy any minion for 0 mana, unless the minion has Divine Shield, which will block the healing-turned-damage.

Priests should always be careful when playing Auchenai Soulpriest in a situation where they may need to heal next turn - if the opponent Freezes the Soulpriest, or simply does not provide a target for it to trade into, the priest will generally be unable to remove the effect, preventing them from using healing to restore their Health. While the damage-dealing version of Lesser Heal is generally far more versatile than the healing version, being unable to heal your minions or your hero can result in defeat. This can also inhibit the use of cards like Holy Nova, due to not wanting to destroy your own board.

Auchenai Soulpriest's effect is also found on Embrace the Shadow and Auchenai Phantasm, albeit in purer and more temporary form. The latter card excels for combos, where its lower cost can allow more spells to be played that turn. While more expensive, Auchenai Soulpriest has the advantage of lasting longer, and also providing a useful minion.

The Auchenai were the original guardians of the draenei grave-city of Auchindoun in Terokkar Forest. They were called "death priests". The Auchenai have been in charge of taking care of the monumental necropolis for not more than 200 years. During the Orcish campaign against their kin, the Auchenai seemingly retreated to their grave-city. Years later, the priest Nemuraan helped the Alliance Expedition to rescue Kurdran Wildhammer from the hands of the Horde.

Sadly, the Void energies emanating from D'ore turned mad this priory. No longer believing that the dead should be left alone to rest, the Auchenai leader Exarch Maladaar started to experiment with necromancy. He even allied with the eredar Levixus, helping him to bind souls to his will.

Even before their fall into madness, the "death priests" were able to see the dead after drinking a potion during a rite of initiation. They were able to summon their fallen kin using the Light, but this was later replaced by enslaving the soul with necromancy. They seem to have abandoned the Light in favor of the Void. 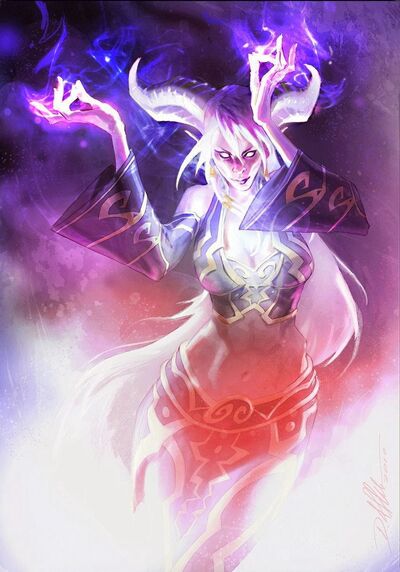