Dan "Artosis" Stemkoski is an e-sports commentator and noted player of Starcraft II and Hearthstone. 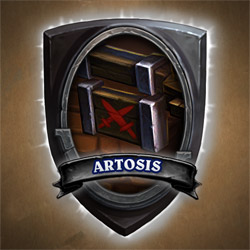 Artosis' icon from the Innkeeper's Invitational 2013

Artosis was one of 8 players invited by Blizzard to participate in the 2013 Hearthstone Innkeeper's Invitational at Blizzcon.

After winning his first two rounds 3-0 and 3-1, he eventually went on to defeat Kripparrian 3-2 in a close-fought final, winning the tournament and claiming his first tournament win at a Blizzcon. He was crowned "Grandmaster of the Hearth" and awarded a special engraved silver tankard in recognition of his achievement.

"I feel that in a game like Hearthstone you can't become good in a vacuum, you need people helping you, you need to work with other people."[1]

"I was pretty excited actually when Hearthstone was announced, because the people who made my favorite game Starcraft were now making a game much like where I started my competitive career - Magic."[1]