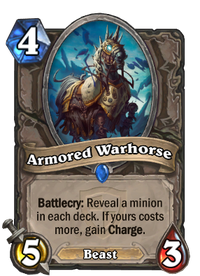 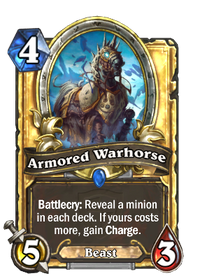 Battlecry: Reveal a minion in each deck. If yours costs more, gain Charge.

Armored Warhorse is a rare neutral minion card, from the Grand Tournament set.

Armored Warhorse can be obtained through The Grand Tournament card packs, or through crafting.

In a control deck, this card can offer a lot of burst damage, especially if buffed. If you use it to attack the face, put it behind a Taunt or give it Divine Shield to keep it on the board for longer.

A horse is a large four-legged, four-hoofed animal with a long face, substantial body, and fast, narrow legs. This is the primary mount for humans, which includes, only now to a lesser extent, the worgen of Gilneas.

The strong bond between the humans of Azeroth and their warhorses has existed for generations. However, since the fall of Lordaeron, only select varieties continue to be bred throughout Alliance-controlled lands. Most prized among these are the stately Evendales of Elwynn Forest, renowned for their loyalty and even tempers. These horses command a hefty sum, but they reward their owners with steadiness and speed. Horses are widely domesticated for riding and as beasts of burden.

Warhorses are a type of horse used as mounts. They are used by the Forsaken (and other Horde races if Exalted with Undercity), paladins and other players by other means.'' 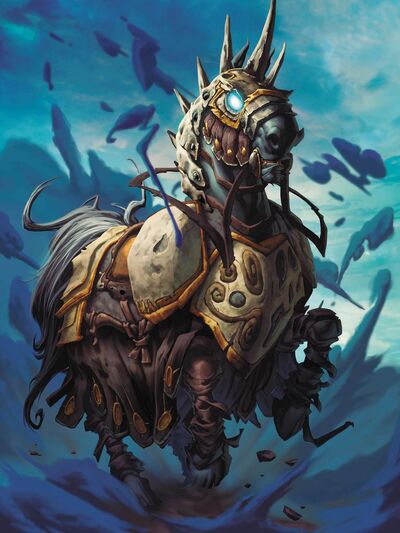