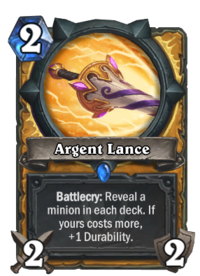 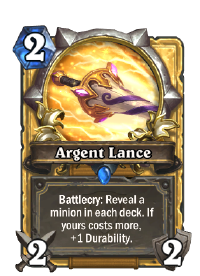 Battlecry: Reveal a minion in each deck. If yours costs more, +1 Durability.

The stripes make it look like a candy cane, but we recommend against licking it.

Argent Lance is a rare paladin weapon card, from the Grand Tournament set.

Argent Lance can be obtained through The Grand Tournament card packs, or through crafting.

This is a good card for a control Paladin deck that likes to use Joust cards. This can help you contest the early game without having to add too many low level minion cards in your deck (and thus without having to weaken your deck's Jousting potential). And the Joust doesn't matter that much normally, as Paladin has lots of other weapons.

Argent Lance is a lance with the symbol of the Argent Crusade used in jousting matches near the Argent Coliseum.

The Lance is wielded by players while completing certain quests, including the one in which The Black Knight is defeated. 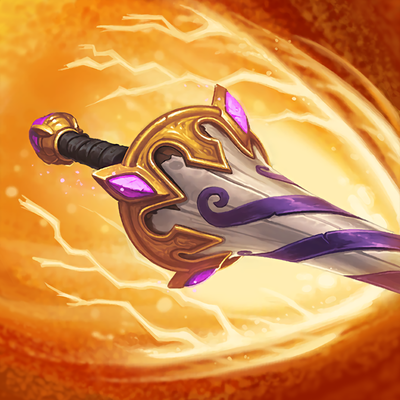