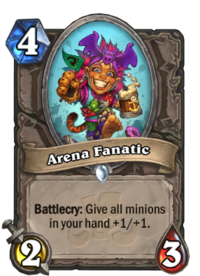 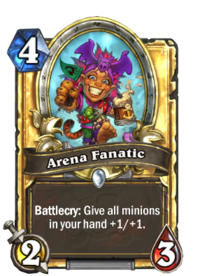 Battlecry: Give all minions in your hand +1/+1.

Arena Fanatic is a common neutral minion card, from the Rastakhan's Rumble set.

Arena Fanatic can be obtained through Rastakhan's Rumble card packs, or through crafting.

This minion is a distant relative of the Grimy Goons handbuff mechanic, but available to all classes instead. Its ability is far more significant than its poor statline, as this card can make up for its terrible stats in buffed minions later on. It works well in a Midrange deck, where larger minions after turn 4 can decide a match. Minion-heavy decks obviously benefit the most from this.

Shaman players can duplicate this card's Battlecry using Murmuring Elemental and Shudderwock, buffing cards repeatedly. It also can use Evolve-type effects in order to negate its poor statline.

Paladin players have the preexisting Grimy Goons mechanics in Wild to augment this minion, and it continues to be directly supported as of Rastakhan in the form of Paragon of Light, Immortal Prelate and Glowstone Technician.

Warlock can boost Hir'eek, the Bat.

Summon
I'm like EVERYONE's biggest fan!
Attack
This is AWESOME!

This gnome is evidently an avid supporter of every single gladiator team competing in Rastakhan's Rumble and seems to be wearing souvenirs from all the different teams (such as a glove representing Halazzi's Lynxes, a pennant with the logo of Gonk's Raptors, and a Hir'eek's Bats headband).