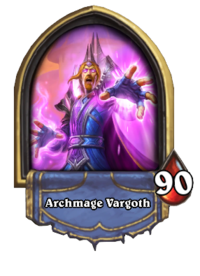 For the minion card of the same name, see Archmage Vargoth.

Archmage Vargoth is a boss that can be encountered during level 10 of Chapter 5 of The Dalaran Heist. 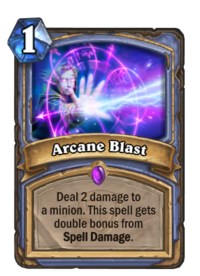 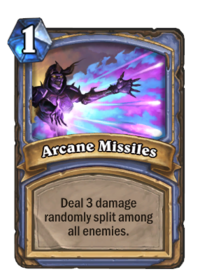 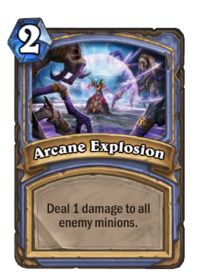 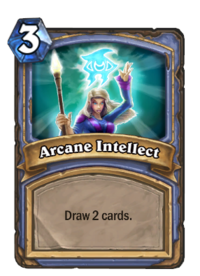 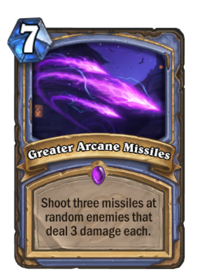 Vargoth specializes in using Spell Damage boosts to make his spells unbearable for you. Take out his Spell Damage minions as fast as possible to prevent them from boosting his spells. Be wary of Arcane Explosion, which can be devastating to your minions when combined with Spell Damage, even your big ones.

When Vargoth plays Aluneth, you have the option of waiting for him to mill out his entire deck and eventually defeating him with Fatigue damage, or at least getting his Health low enough for you to land the finishing blow. Combined with his Hero Power, which already adds cards to his hand, his hand can become full very quickly, potentially causing many good cards in his deck to be burned.

Fly-By is very useful at the stage where he plays Aluneth, because he faces the danger of drawing the Kadoom-Bot faster.

Arch-Villian Rafaam
Vargoth is a crafty mage. I suspect he hides cards in his sleeves.

Archmage Vargoth
Know that you babble at an Archmage of the Kirin Tor.

Archmage Vargoth
Arcane power, at a moment's notice.
I won't hold back.
Taste the power, of the Arcane!
This has always come easily to me.
This should do nicely.

Arcane spell
Feel the might of the Kirin Tor!
Taste arcane power!
Minion with Spell Damage
Even I need assistance casting spells occasionally.

I represent the power of the Kirin Tor!

Spell with "Arcane" word
Ah, have you read one of my books?

What order do YOU represent?

We shall bring you down again, Malygos!

Kalecgos! Why have you turned against me?

Archmage Vargoth
Do you know how long it took for me to write these runes?
I could stand to come up with some new Arcane spells.
Why do frost mages get to have all of the fun?

Archmage Vargoth
Oh, you got SO far, too...

Archmage Vargoth is a level 70 quest giver located inside the Violet Tower in the contested territory of Netherstorm. Throughout most of the questline, he interacts with questers using a projection.

Vargoth was the leader of the mages of the Kirin Tor that accompanied the Alliance Expedition to Draenor and founded Kirin'Var Village in Farahlon, later known as Netherstorm. While there he worked with the mages to study the Ley lines and heard of the alliance between the human and orcs from the Laughing Skull clan. At some point, he sent a report with General Turalyon to Dalaran with reports, apparently not knowing about the Alliance heroes that stayed here after the explosion of Draenor.

The village has survived the following years until the attack of Kael'thas Sunstrider and his blood elves that killed all people in the village except himself; since he was locked up in a magical way in the The Violet Tower and guarded by Ar'kelos. He sensed that Ravandwyr, his apprentice who he sent away with his staff during the attack, was still alive. Through his staff he worked with the adventurers to free himself.

Vargoth took up residence in the Violet Citadel of Dalaran, in Archmage Vargoth's Retreat. The room is accessible only via the book The Schools of Arcane Magic - Mastery, from the achievement Higher Learning. Vargoth will give you a Kirin Tor Familiar if you talk to him.

Vargoth later sent his image to aid adventurers in Mount Hyjal during the quest The Protectors of Hyjal, and then again on the Violet Rise on the Isle of Thunder.

Vargoth sent various artifacts from the main timeline into the alternate timeline of Draenor. Adventurers collected them and brought to Zooti Fizzlefury, Vargoth's most trusted friend and confidant, who summoned Vargoth's image to Draenor. The image then joined the adventurers as a follower in their Garrisons in order to assist in his research of Draenor's past.

He notes that his image is still very "outdated" and that he has traded up those old robes for much better looking ones.

Vargoth appears in-person once more, having joined the Council of Six. Vargoth voted in favor to allow the Horde into the Kirin Tor and was present when the spell to teleport Dalaran to the Broken Isles was cast. When Aethas Sunreaver asked the council to allow him to rejoin the Kirin Tor, Vargoth voted yes.

Vargoth is later revealed to have ties with the Empyrean Society, an organization of mages looking into forbidden magics such as fel. Khadgar states that because Vargoth has proven his loyalty to the Kirin Tor many times in the past, he will be given the benefit of the doubt. Nevertheless, Khadgar is obligated to share the concerns about Vargoth with the rest of the Council of Six. Kalecgos and Karlain, two other members of the council, also noted that they had seen Vargoth behaving oddly. As Vargoth has been absent for a while, the Conjuror of the Tirisgarde takes a look through his room in the Violet Citadel alongside Kalec and discovers his journal, within which they find notes about the Nightborne Soulstone, which can channel the power of the souls captured within it.

The Tirisgarde later discover that Vargoth has been possessed by Kathra'natir. He is freed and Kathra'natir is imprisoned in the Nightborne Soulstone that he had been using to drain Meryl Felstorm. Vargoth has since been absent, not attending the Council meetings.

When Magni called upon the champions of the Armies of Legionfall to draw the corruption out of the Sword of Sargeras, Vargoth carried Aluneth, representing the Tirisgarde for non-mage players.