Ingenuous. Inscrutable. Indefatigable. In... your... way.

For other representations of Khadgar, see Khadgar (disambiguation).

Archmage Khadgar is the final boss that can be encountered during the Chapter 5 of The Dalaran Heist. 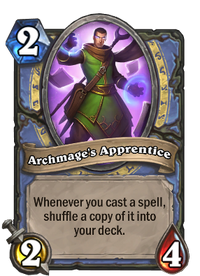 Archmage Khadgar, being the final boss of The Dalaran Heist is a grand challenge to surmount and will truly test the deck you've been building up to this point.

The Kirin Tor Elementals' ability to recast spells will become overbearing if you allow it, prioritize killing them above all else, specially considering he has the means to make duplicates of them using Molten Reflection and Echo of Medivh, which will cast again creating even more Kirin Tor Elementals, quickly spiraling out of control. Thankfully, these minions have rather small stats and Khadgar doesn't have ways to buff them outside of the Bananas created by Banana Buffoon, giving you the opportunity to destroy them with waveclear, single-target spells or trade with them using your own minions before they become an issue.

If there are larger issues to deal with, such as Malygos, change priorities but try and destroy as many Kirin Tor Elementals as you can.

A stupid, albeit possible strategy is to use Millhouse Manastorm if you were risky enough to pick him up. While all of his dangerous spells will be casted twice for free, his card draw spells like Research Project will almost always be used without caution, putting into Fatigue a lot quicker. EVIL Propaganda can also win you the game, because you can take all of his elementals.

Arch-Villian Rafaam
Khadgar is among the greatest mages of his generation. You go in first.
Khadgar is powerful but easily distracted. Try dangling some keys in front of him.
Khadgar leads the Kirin-Tor. Running him from town will be a supreme triumph.
The archmage is smart. Be smarter. The archmage is skilled. So... cheat.

Archmage Khadgar
You tell Rafaam his plan is finished.

Archmage Khadgar
I've got tons of these things.
It'll give you a tour of the city if you like.
These little guys just LOVE magic.
These things are so handy.

Any spell played while a Kirin Tor Elemental is on board

Archmage Khadgar
That's a good spell.
Wonderful spell, that one.

Archmage Khadgar
That's one way to get ahead. Haha! A... head.

Archmage Khadgar
Take your time. You're surrounded. And... doomed.
There's a 'concede' button down there in the corner.
You're doing well! Was that condescending? Good.

Archmage Khadgar
Rafaam!! Show yourself! You're not getting away...
Citizens of Dalaran, raise your eyes to the skies and observe! We are saved!