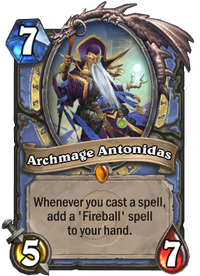 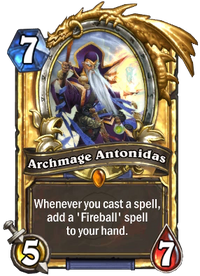 Whenever you cast a spell, put a 'Fireball' spell into your hand.

For the boss in Book of Heroes, see Archmage Antonidas (boss).

Archmage Antonidas is a legendary mage minion card, from the Classic set. 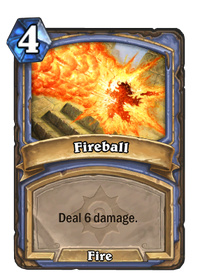 As a 7 mana 5/7 minion, the Archmage Antonidas is not a big drop for the mana cost. His worth comes from his unique ability. Every time you cast a spell, a Fireball card is placed into your hand. This effect activates in response to casting any spell, including the Fireball cards gained in this way.

If you have some way to protect him, for example with one or two Taunt minions, you can easily use him to generate several Fireball cards. Note that Antonidas' effect is the same regardless of the size, effect or mana cost of the spell cast. Playing several cheaper spells can allow you to quickly stock up on several Fireball cards, possibly giving you enough ammunition to finish your opponent within a turn or two. If you have him in your deck and you can protect him, he can easily turn a mediocre spell damage deck into a good one. He can also give you a card advantage. Spell Damage minions can also increase the benefit of this card.

Your opponent will generally want to remove Antonidas as quickly as possible, which means you should try to take advantage of his special effect while you can. Ideally, play a spell card immediately after summoning Antonidas; that way, even if your opponent immediately removes him, you will still have gained an extra Fireball. As long as this is achieved, the card may be considered worthwhile - a 5/7 that uses up some of your opponent's removal effects, plus a spare Fireball card in your hand. However, Antonidas' mana cost limits the number of spells that can be played the same turn, as well as which spells. Remember that non-obvious spells like Mirror Image, Arcane Intellect, The Coin, Spare Parts, and all secrets will also trigger his effect, and make the most of his effect while you have him. Having Sorcerer's Apprentice on the board may greatly improve Antonidas' Fireball-generating ability.

If the opponent has just played Millhouse Manastorm, if you have or can afford to summon Antonidas and have even a single spell, it is effectively an instant-win for you, due to Millhouse's Battlecry. You will be able to play any spell for free, and get a Fireball in return, which you can then also play for free, again earning you another Fireball. This process can be repeated indefinitely for the duration of the round, effectively providing infinite Fireballs until the turn timer expires, or Antonidas is neutralised. For this reason, players should never play Millhouse Manastorm when the opponent has Antonidas on the board, and are strongly cautioned against playing Millhouse in later rounds against any mage.

Loatheb can be used to soft-counter Archmage Antonidas by greatly limiting the use of spells or delaying their use by one turn, hopefully buying enough time to take care of Antonidas or ending the game altogether.

Archmage Antonidas is a core card for numerous one-turn-kill combos for mages. They involve putting four copies of Sorcerer's Apprentice with Antonidas plus a cheap enough spell to obtain 0-mana Fireballs which can be cycled through indefinitely.

Antonidas was a character in Warcraft III, seen briefly a few times before eventually being killed by Arthas when Arthas sieged Dalaran for the Scourge. Antonidas was well known and respected in Lordaeron as one of its most elder and powerful of mages. He also trained Jaina Proudmoore. She was his newest, and most promising, student before he met his demise. He also knew Kel'Thuzad, a mage that eventually forsook the city to study forbidden necromancy before the Scourge was formed. Towards his end, he used his powerful magic to construct an anti Undead aura, hoping it would finally stop the Scourge invasion by protecting Dalaran. While the magical aura worked in practice, it was not enough and still they took the city. The magic was then lost when Antonidas and the order were slaughtered.

Antonidas was but a mere boy when he became an apprentice to one of the Kirin Tor. He was a tenacious learner, pouring over books in the magical libraries of Dalaran. After only a few short years of studying under the sect, Antonidas had outclassed his peers and earned their admiration, as well as the respect of his elders. At the age of 12, Antonidas' thesis, "The Ramifications of refined Reverse Time Travel Phenomena into Quantifiable Magical Practice", earned him the Kirin Tor Sash of Supreme Acumen, the youngest ever to receive the award. Shortly thereafter the Ruling Council offered him official placement in the Kirin Tor Advanced Research and Illumination Sect, also the youngest to receive an official invitation.

As the mage grew older, he continued to learn and hone his abilities. His natural talent for defensive magic and wisdom beyond his years made Antonidas an ideal candidate for a position on the Council of Six, which he eventually attained. Antonidas proved not only wise and fair, but infinitely regimented in goal to become more knowledgeable. He quickly became one of the dominant voices of Dalaran.

"Archmage Antonidas, Grand Magus of the Kirin Tor. The great city of Dalaran stands once again - a testament to the tenacity and will of its greatest son. Your sacrifices will not have been in vain dearest friend. With Love and Honor." - Jaina Proudmoore