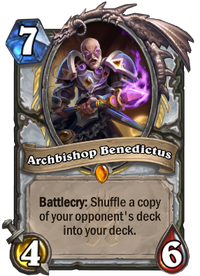 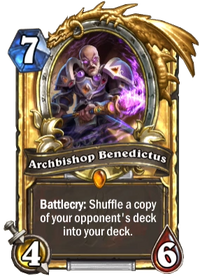 Battlecry: Shuffle a copy of your opponent's deck into your deck.

Nobody expects the Archbishop's Benediction!

Archbishop Benedictus is a legendary priest minion card, from the Knights of the Frozen Throne set.

Archbishop Benedictus can be obtained through Knights of the Frozen Throne card packs, or through crafting.

Archbishop Benedictus is a slow Legendary minion that can seriously tip the game in the Priest's favor in the right matchup. In most situations, the card's effect will be insignificant, however in some games, especially against long-game control decks or fatigue style decks, its effect can almost guarantee a victory if the game reaches fatigue. Combined with effects such as Amara, Warden of Hope or Reno Jackson, immense amounts of time can be added to the game in favor of the Priest.

In Arena, however, its poor stats cause it to ultimately be a poor card, especially since Arena games very rarely reach fatigue.

Archbishop Benedictus was a student of Archbishop Alonsus Faol and succeeded him as the leader of the Church of the Holy Light. He was later revealed as the Twilight Prophet (or Twilight Father) of the Twilight's Hammer cult after the death of Cho'gall. As such, he was a high-ranking lieutenant of Deathwing and the Old Gods, and aided them in their efforts to destroy all life on Azeroth. He was slain at Wyrmrest Temple while attempting to waylay the orc shaman Thrall and his allies.