Arch-Thief Rafaam is a hero that the player can pick in the Battlegrounds game mode. 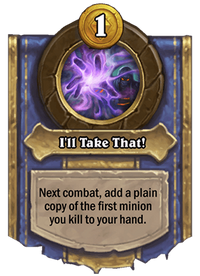 Arch-Villain Rafaam's hero power is very strong as it allows him to "buy" a random minion for 1 gold. Early on, he can use them to generate tempo by swiping early minions and build up his board, while using them to landing on triples during the mid-game.

As Rafaam, you are encouraged to stay at tier 1 for the first couple of turns and make use of your hero power as much as possible to generate value and triples. Leveling up at turn 4 (at 6 gold) for tier 2 and turn 5 (at 7 gold) for tier 3 is the most usual way to go. Alleycat , Murloc Tidehunter, Deck Swabbie or even Wrath Weaver are excellent tier 1 picks for Rafaam. The first three minions are value cards that are easy to land a triple on (as other players might also pick them up) and landing on a golden Wrath Weaver early in the game can be a game-winning edge. if you manage to land a triple, either look for strong synergies (such as Floating Watcher if you have Wrath Weaver on board) or minions with strong stats and immediate impact (like Bolvar, Fireblood or Mechano-Egg). Once you have landed on triples and found a strong reward minion, you can tavern up more aggressively to tier 5 or even 6 to find build-defining minions such as Brann Bronzebeard or Mama Bear to transition to a late game build, or look for better buff cards and synergies to solidify your board.

When playing against Rafaam, some player might try to avoid him to gain value through his hero power by adjusting their boards. This might include moves like moving a token (like Tabbycat) at the far left of their warband to reduce the value gained; moving easy triple targets like Spawn of N'zoth or other token generators away to avoid him landing a triple; or to sell their minions and tier up more aggressively so that there is no minion to steal (for example, some might choose to sell their only minion on turn 3 to acquire the 6 gold for the tavern tier 3 upgrade). Do not attempt these moves unless you are confident that you are able either catch up on the lost in tempo or are able to take some damage. As Rafaam, try to be aware of your opponents more via their battle records at the history bar to gain better insight of their moves and warband to counter these strategies.