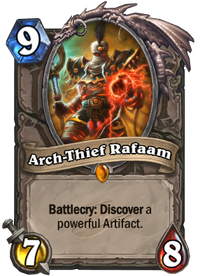 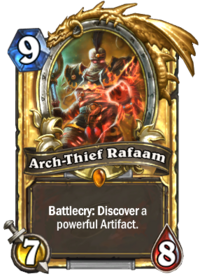 He's very good at retrieving artifacts. From other people's museums.

Arch-Thief Rafaam is a legendary neutral minion card, from the League of Explorers set.

Regular Arch-Thief Rafaam is obtained by completing the Hall of Explorers, the fourth wing of The League of Explorers.

As a Wild format card, both regular and golden versions of Arch-Thief Rafaam can also be crafted for the following amounts: 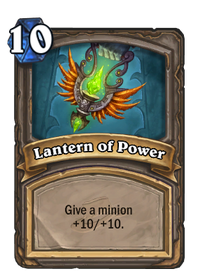 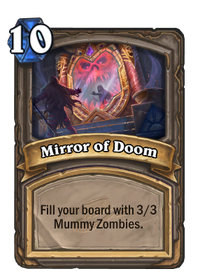 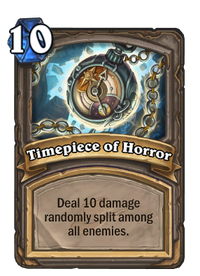 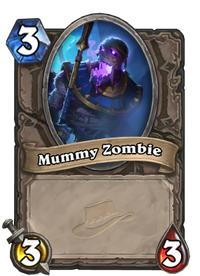 Timepiece of Horror shoots 10 missiles, each one dealing 1 damage to a randomly selected enemy character:

This card's power is in its generated Artifact cards which you would choose based on the situation:

Rafaam is at his best when you pick up the Artifact you think you will need next turn, based on the current state of the game and what you think the state will be next turn (assuming Rafaam was played on your turn 9). If you have Naga Sea Witch on your board, you can play both Rafaam and the discovered artifact on turn 10. This reduces the risk that the chosen artifact becomes useless during your opponent's turn.

Artifacts can be quite useful if played with Atiesh equipped, due to their high cost. Note that this synergy is not possible if Mirror of Doom is played, as the board will be full.

Summon
I am Rafaam, the supreme archaeologist.

For the lore of this card, see Rafaam (Lore).