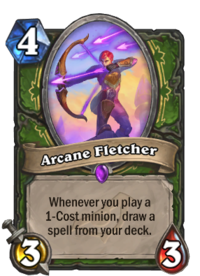 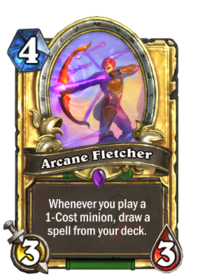 Whenever you play a 1-Cost minion, draw a spell from your deck.

Stop trying to make fletch happen. It's not going to happen.

Arcane Fletcher is an epic hunter minion card, from the Rise of Shadows set.

This card works well with Springpaw, as it provides you with two 1-cost minion summons with a single card, or with Halazzi, the Lynx to reload your hand.

If running a deck with a multitude of 1-cost minions, Toxmonger is also a strong choice.