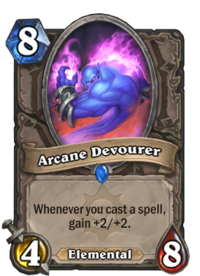 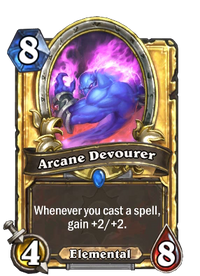 Likes her magic with a pinch of salt.

Arcane Devourer is a rare neutral minion card, from the Classic set.

Ideally, this card is played alongside two cheap spells to make it a 9/9 on the turn it's summoned. This can be best exploited with cost-manipulating effects like Preparation and Innervate.

Arcane Devourers are bizarre creatures and fabrications of uncontrolled energies near the Sanctum of the Moon in the Ghostlands.