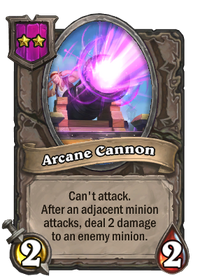 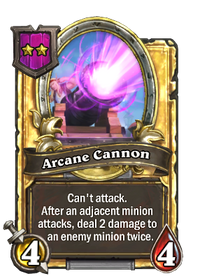 Can't attack.
After an adjacent minion
attacks, deal 2 damage
to an enemy minion.

Arcane Cannon was a Tier 2 minion in the Battlegrounds game mode.

Arcane Cannon was a support minion which could deal indirect damage throughout the Combat Phase similarly to Soul Juggler, but it couldn't reliably protect itself due to its inability to attack. As it triggered through attacks from friendly minions, it synergized with minions that can attack immediately like Scallywag's Sky Pirate, Yo-Ho-Ogre and Illidan Stormrage's Wingmen, or Windfury minions such as Zapp Slywick or Seabreaker Goliath.