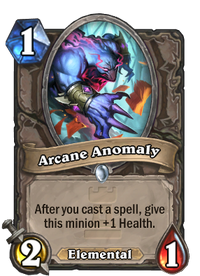 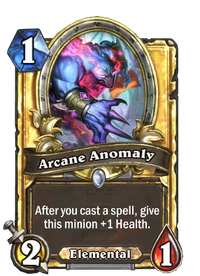 Whenever you cast a spell, give this minion +1 Health.

He used to get work as a Spatial Anomaly, but he got tired of having his polarity reversed.

Arcane Anomaly is a common neutral minion card, from the One Night in Karazhan set.

Two copies of regular Arcane Anomaly are obtained by defeating the Magic Mirror, the second boss in One Night in Karazhan's first wing, The Parlor.

As a Wild format card, both regular and golden versions of Arcane Anomaly can also be crafted for the following amounts:

This card has obvious potential in Mage decks, specially Tempo Mage, although Mana Wyrm has better playability on turn 2, as without following it up with a Coin or other spell, it is vulnerable to ping effects. Arcane Anomaly may also fit well in decks such as Miracle Rogue, with its low-cost spells, Combos and Preparation. Class aside, Arcane Anomaly may be worth considering in most decks which include Yogg-Saron. It also has the benefit of being an inexpensive Elemental, allowing it to be used as a token to activate effects such as Tol'vir Stoneshaper or Servant of Kalimos.

In arena, Arcane Anomaly is a fine pick as an early game card that has potential to be strong in drafts with a lot of inexpensive spells.

Arcane Anomaly is a mob found in the Menagerie in the Karazhan raid. It is a mana surge, a type of elemental.

Mana elementals can also be summoned by powerful mages and bound to serve, similar to Water Elementals. Many can be found in service of organizations like the Kirin Tor, serving as guards or retainers. Arcane elementals are similar creatures.

Mana surges and arcane wraiths are both types of "mana elementals".