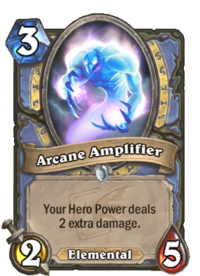 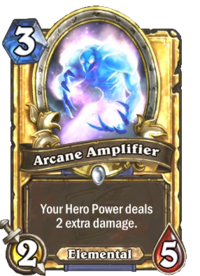 Arcane Amplifier is a common mage minion card, from the Galakrond's Awakening set.

An upgraded version of Fallen Hero, costing one more mana and dealing one extra damage.

This can be treated as a Daring Fire-Eater that costs 2 more, for an addition of 1/4 in stats. The high health pool for a 3 mana minion gives this card a decent chance of surviving a turn, letting you play it on curve or even use its powerful effect multiple times.

As an Elemental with a flexible ability, Arcane Amplifier is a good choice for Elemental Mage. It can be used to fuel Elemental Allies or power up an Elemental for next turn.

This has synergy with Coldarra Drake, if either can somehow survive a turn. If Coldarra Drake survives a turn, then you can play Arcane Amplifier and deal 9 damage, which is not very powerful, but if BOTH survive a turn, you can deal a whopping 15 damage for 10 mana. This can be accomplished with Time Warp, although there are stronger uses for that card.