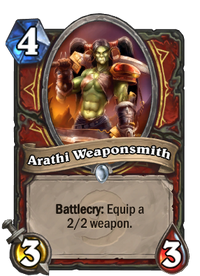 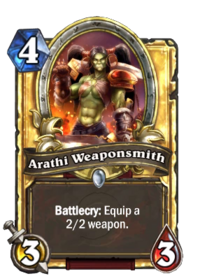 50% off fist weapons, limited time only!

Arathi Weaponsmith is a common warrior minion card, from the Classic set. Its Battlecry equips a Battle Axe.

Arathi Weaponsmith can be obtained through Classic card packs, through crafting, or as an Arena reward. 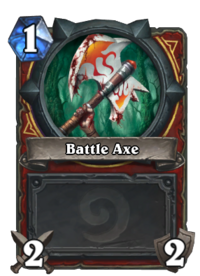 The Arathi Weaponsmith is a strong turn 4 play, even with a weaker than average minion; the Battle Axe will often help the warrior in clearing up the opponent's early game plays and obtaining/securing board control.

Be aware that you are not able to equip more than one weapon at a time. This means that if you already have a weapon equipped when you play Arathi Weaponsmith, the Battlecry effect will overwrite any weapon that you have currently equipped.

The Arathi Basin is one of the main staging points of war between the humans and the Forsaken in Azeroth. Arathi Basin is a 15 vs 15 domination battleground, where each side attempts to control the Stables, Blacksmith, Mine, Lumbermill and Farm for as long as possible. The Defilers' elite troopers seek to sever the vital connection between the humans and their dwarven allies to the south. Meanwhile, the League of Arathor seek to reclaim lost lands for their benefactors in Stormwind.