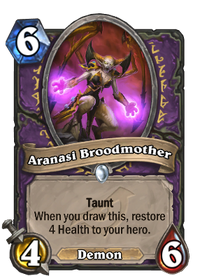 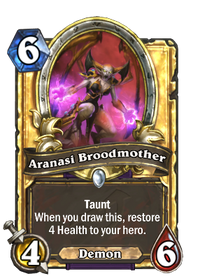 Taunt
When you draw this, restore 4 Health to your hero.

She's got a big brood and a big mood.

Aranasi Broodmother is a common warlock minion card, from the Rise of Shadows set.

Aranasi Broodmother can be obtained through Rise of Shadows card packs, through crafting, or as an Arena reward.

This card has decent stats as a defensive Taunt minion, and its effect provides Warlocks with healing that is essentially free, if unpredictable.

Combos well with Plot Twist, giving a chance to heal off the effect again.

The aranasi are a race of arachnid demons. Their origins are not fully understood - scholars who have studied the Burning Legion speculate that they are the remnants of a forgotten race on a world long ago conquered by the armies of Sargeras.

Some aranasi appear to look like typical spiders, while others have a partially humanoid appearance resembling nerubians or fire spiders, and some have an even more humanoid appearance, standing on two legs with wing-like structures on their backs. At least some aranasi have potent venom sacs that secrete violent toxins.