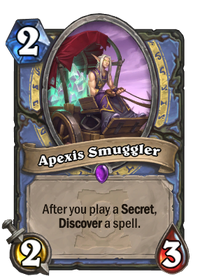 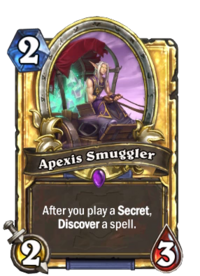 After you play a Secret, Discover a spell.

Apexis Smuggler is an epic mage minion card, from the Ashes of Outland set.

In Arena, its stats are impressive for its cost but its effects are limited due to the scarce amount of secrets available in Arena.

Summon
My cargo, my business.
Attack
Move along!

Apexis crystals are powerful relics of the Apexis, an extinct arakkoan civilization, found in both Outland and the alternate Draenor. In Outland, items called Apexis Crystals and Apexis Shards can be obtained in the Blade's Edge Mountains and are used to trade with the Ogri'la faction, while on Draenor, Apexis Crystals are a currency acquired from a wide range of activities and used to buy armor from various vendors.

Judging by his tabard, this crystal smuggler is a member of the Scryers.

The Scryers are a faction of blood elves led by Voren'thal the Seer. The group broke away from Prince Kael'thas Sunstrider, heir to the throne of Quel'Thalas and ruler of the blood elven race, and offered to assist the naaru in rebuilding Shattrath City. They are at odds with the Aldor, and compete with them for power within Shattrath and for the naaru's favor. Nowadays, the Scryers are notable for having the largest library out there, housing the "greatest repository of lore in Outland".