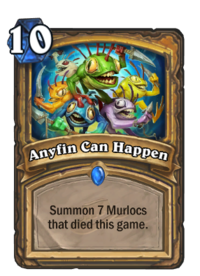 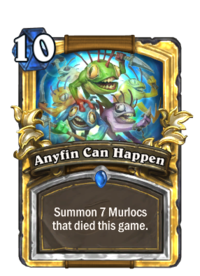 Summon 7 Murlocs that died this game.

Anyfin Can Happen is a rare paladin spell card, from the League of Explorers set.

Two copies of regular Anyfin Can Happen are obtained by defeating Giantfin, the second boss in The League of Explorers's third wing, The Ruined City.

As a Wild format card, both regular and golden versions of Anyfin Can Happen can also be crafted for the following amounts:

Contrary to typical Murloc deck tactics, this card is best used not in decks that can play many Murlocs, but in decks that make use of a few key Murlocs. It combos very well with Bluegill Warriors and Murloc Warleaders, netting you two 6-damage Charge minions. With a second Anyfin Can Happen and an empty board, you can turn these into 4 Bluegills with huge damage, adding up to 30 or 32 damage on a single turn. If you wish to only have a single Anyfin in your deck, two Murloc Tidehunters is a good choice as while the Battlecry won't trigger again, the Murloc Scouts summoned earlier will be resummoned.

On the off chance you're up against another player with a Murloc deck, Anyfin Can Happen will also summon any of the opponent's dead Murlocs. You can use this to your advantage if enough of your own Murlocs haven't died yet to get value out of this card.

This card is less useful if are using Murlocs to swarm the board early game, like Sir Finley Mrrgglton or Coldlight Seer. Murloc Knight and especially Vilefin Inquisitor are also poor choices for this card, as their generated minions will make this card's result extremely random with a likelihood of a lot of 1-Health murlocs.

In Arena this card is of little value due to its dependence on drawing the right cards both during deck building and in the matches.

This card's flavor text is a reference to the song "Anything Could Happen" by Ellie Goulding. 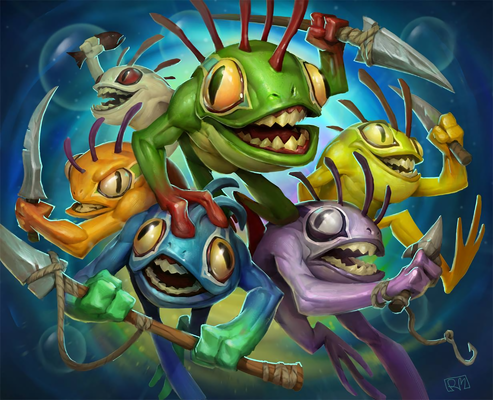