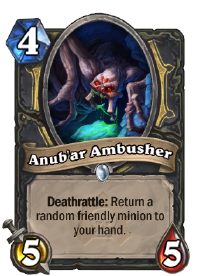 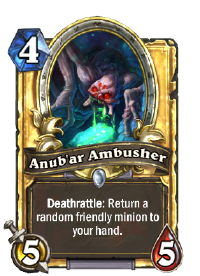 Deathrattle: Return a random friendly minion to your hand.

Originally he was called "Anub'ar Guy who bounces a guy back to your hand", but it lacked a certain zing.

Anub'ar Ambusher is a common rogue minion card, from the Naxxramas set.

Two copies of regular Anub'ar Ambusher are obtained by completing the rogue Class Challenge in Curse of Naxxramas.

As a Wild format card, both regular and golden versions of Anub'ar Ambusher can also be crafted for the following amounts:

This card's Deathrattle can be very useful in combination with minions with powerful Battlecries, or in order to remove enchantments or cancel damage. However, unlike Shadowstep the player must pay the full price to resummon the returned minion.

Without careful planning, this minion's Deathrattle could easily turn to the player's disadvantage. Opponents may choose to destroy the Ambusher in order to force one of their minions to be returned. If this returns a powerful or costly minion, this could strongly disadvantage the controlling player. Always consider carefully order of attack before taking any action which will cause the death of the Ambusher.

The Anub'ar are a group of undead nerubians, located around Icemist Village and within Azjol-Nerub. The Anub'ar are likely named after and led by Anub'arak, as "Anub'ar" is the first six letters of his name and all the undead nerubians around him have this title. They are named similarly to the Nerub'ar, but it is unknown which came first. 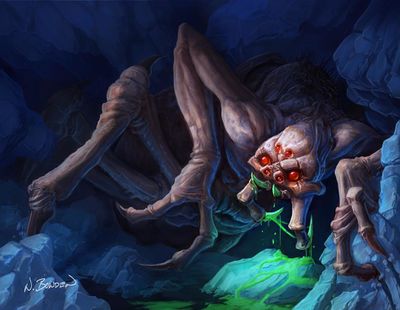