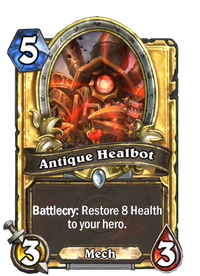 Battlecry: Restore 8 Health to your hero.

They don't make 'em like they used to! (Because of explosions, mostly.)

Antique Healbot is a common neutral minion card, from the Goblins vs Gnomes set.

Antique Healbot can be obtained through Goblins vs Gnomes card packs, or through crafting.

As a powerful healing effect, Antique Healbot can be useful for stalling aggro decks, allowing the opponent to exhaust their impetus and buying the play time to find a counter. It is an excellent target for return effects such as Ancient Brewmaster, Time Rewinder or Shadowstep. Primarily useful for its Battlecry with very poor stats for its cost, this minion is an excellent target for Recombobulator, with a good chance of gaining a significantly stronger minion.

It may be a poor choice for Arena, due to healing not being a preferred strategy, with the exception of Warlock and Rogue which heavily rely on using Health as a resource.

Beware that summoning this minion with an Auchenai Soulpriest on your board will result in 8 damage being dealt to your hero.

As of Descent of Dragons, Amber Watcher is a superior replacement to this minion exclusive to paladins, since it has decent stats for its cost and is even more useful in both combat and tribe synergy.

Summon
Back from the junk heap. 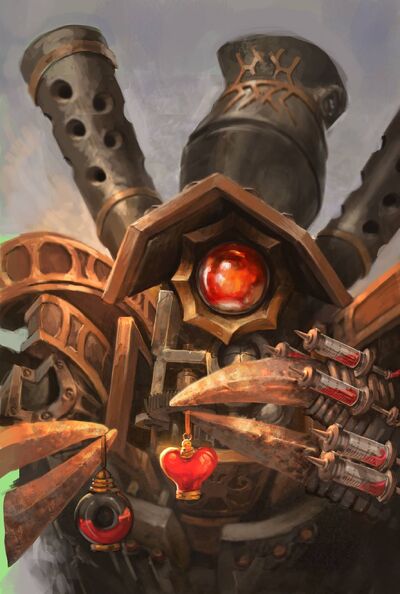