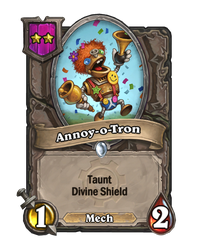 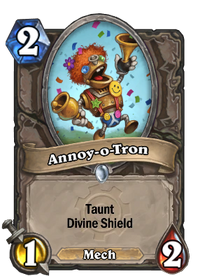 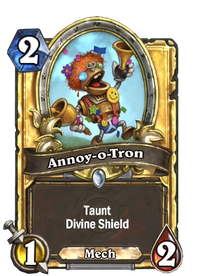 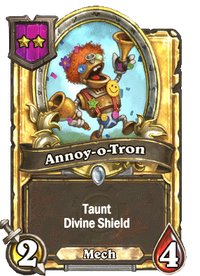 Annoy-o-Tron was a Tier 2 minion in Battlegrounds game mode.

Taunt and Divine Shield made Annoy-o-Tron a useful early-game damage sponge and a straight upgrade from Righteous Protector thanks in large to being a mech. However, the existence of Psych-o-Tron renders this card obsolete from tier 3 onward. As such, Annoy-o-Tron usually finds itself being sold to make room for bigger minions, so it should not be targeted for buffs.

Unlike Psych-o-Tron however, Annoy-o-Tron was sometimes used as a late-game tech against Zapp Slywick to soak up its two hits in place of a more valuable minion like Junkbot, although this was a very niche use that required knowledge of what your upcoming opponent had in their comp.