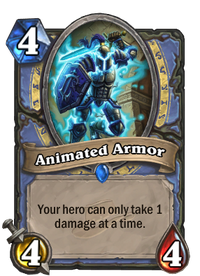 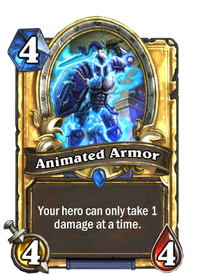 Your hero can only take 1 damage at a time.

Try putting it on. Wait, let me get my camera.

Animated Armor is a rare mage minion card, from the League of Explorers set.

Two copies of regular Animated Armor are obtained by completing the mage Class Challenge in The League of Explorers, unlocked upon completing fourth wing, the Hall of Explorers.

As a Wild format card, both regular and golden versions of Animated Armor can also be crafted for the following amounts: 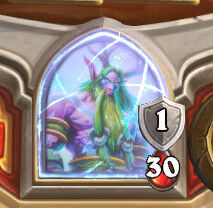 This card almost completely shuts down damage to your hero, forcing your opponent to kill it if they want to win the game. Very strong against burst and aggro strategies.

This card is less effective against opponents capable of delivering several instances of damage, such as through several minions, or spells like Arcane Missiles or Avenging Wrath.

Animated Armor is one of the strongest examples of a soft Taunt in the game, as it is almost impossible to effectively harm its controller as long as it is alive (and not silenced). It is particularly effective against OTK combos which rely on dealing single large bursts of damage to the face to win (such as Oil Rogue), forcing the opponent to disrupt or delay their combo to remove the Armor first.

Like the Fossilized Devilsaur, this suit of armor was an exhibit in the Hall of Explorers, having been collected by the League of Explorers. It was later brought to life by Arch-Thief Rafaam using the Staff of Origination to serve as a distraction while he attempted to ransack the Hall, featuring as The Steel Sentinel. The Sentinel's Hero Power grants the same power as this minion, with the Heroic version also granting it to the Sentinel's minions.

Following its defeat, the armor's left greave remained intact, and was given by Brann Bronzebeard to the explorer during their battle with Arch-Thief Rafaam.[5]

The armor itself once belonged to Anduin Lothar, after whom Anduin Wrynn was named by his father Varian. The armor's shield bears the emblem of Lordaeron, a fallen human kingdom in the north of the Eastern Kingdoms currently contested between the Forsaken, the Alliance, the Argent Crusade, the Scarlet Crusade, and the remnants of the Scourge.