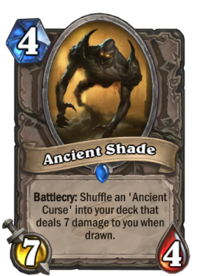 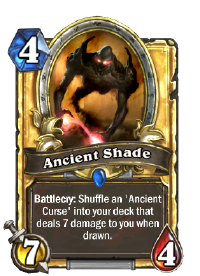 Battlecry: Shuffle an 'Ancient Curse' into your deck that deals 7 damage to you when drawn.

Warning: Do not expose to direct sunlight.

Ancient Shade is a rare neutral minion card, from the League of Explorers set.

Two copies of regular Ancient Shade are obtained by completing the Temple of Orsis, the first wing of The League of Explorers.

As a Wild format card, both regular and golden versions of Ancient Shade can also be crafted for the following amounts: 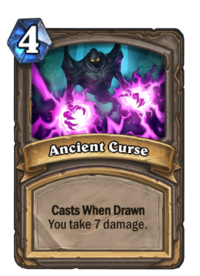 This is a good option for aggro decks. Its 7 Attack and decent 4 Health make it a terrifying early game presence, countered by the Ancient Curse card it shuffles into the player's deck. However, in decks aiming to win quickly, the Ancient Curse is unlikely to be drawn before the end of the match, effectively removing the drawback. Aggro decks also tend to care less about their own Health, focused purely on dealing damage. There is also the possibility of using cards like Fel Reaver, Tracking, and the Golden Monkey to attempt to completely negate its drawback by simply removing the Ancient Curse.

In slower decks the Ancient Shade can still provide good value, but also runs the risk of a shock later on.

The biggest drawback to Ancient Shade is that it is still extremely easy to remove, with only 4 Health leaving it vulnerable to poor trades against the likes of Piloted Shredder or removal by Flamecannon, and its 7 Attack opening it up to Big Game Hunter. If the opponent removes the Shade before it can attack, the player will still run the risk of suffering the Ancient Curse. 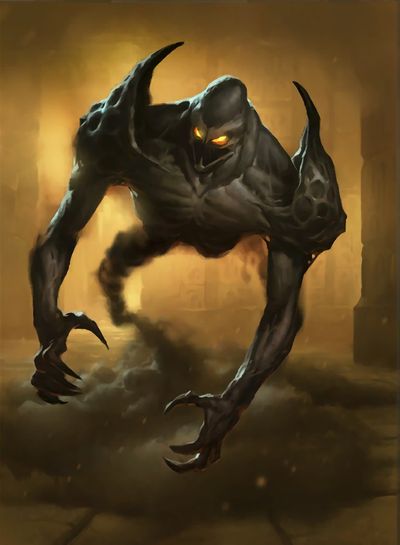