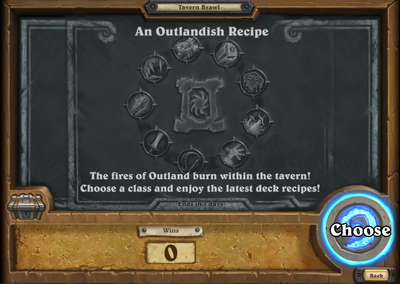 "The fires of Outland burn within the tavern! Choose a class and enjoy the latest deck recipes!"

An Outlandish Recipe is a Tavern Brawl. It debuted on June 17th, 2020.

This Brawl sees players competing with pre-made decks, matching Ashes of Outland-themed Deck Recipes. Before each game the player chooses a class, which also determines their deck. All matches within this Brawl are played on the Ashes of Outland battlefield.

The pre-made decks used in the Brawl match the Deck Recipes added with Ashes of Outland, as suggested to players when creating new decks.