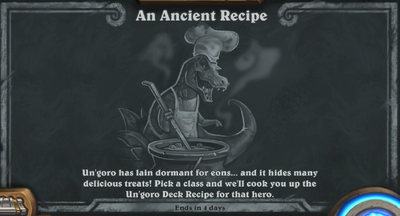 "Un'Goro has lain dormant for eons... and it hides many delicious treats! Pick a class and we'll cook you up the Un'Goro Deck Recipe for that hero."

This Brawl sees players competing with pre-made decks, matching Un'Goro-themed Deck Recipes, with most built around a specific Un'Goro Quest (Rogue/Paladin/Druid/Warlock/Warrior/Priest) or synergy with types (Hunter/Mage/Shaman). Before each game the player chooses a class, which also determines their deck. At the beginning of each player's first turn, the recipe's flavor text is displayed to both players, providing an overview of the deck's contents and strategy. All matches within this Brawl are played on the Journey to Un'Goro battlefield.

The pre-made decks used in the Brawl match the Deck Recipes added with Journey to Un'Goro, as suggested to players when creating new decks.

This Tavern Brawl is less of a competition and more of an opportunity to try out legendary cards, especially quests, and see how they play. Your strategy depends on the deck you choose. If you are not sure what your deck tries to acomplish, please consult the list below:

This is a midrange deck built around Jungle Giants, and it is surprisingly good at making use of this quest. It uses Menagerie Wardens and Giant Anacondas to accelerate your questing progress and summon Barnabus as early as possible. Once the Dino King is in play, the deck aims to draw a lot of cards using Nourish and The Curator and play the drawn cards for free to create an explosion of tempo that overwhelms your foe. While there are few answers to such an onslaught of huge creatures, keep in mind that the Warrior and Warlock decks contain Brawl and Twisting Nether respectively, so against those classes, don't throw in everything, even if you can.

This is a straightforward beast-deck, with its core card being Dinomancy. It is not too different from common hunter decks other than being invested into beast-synergy more heavily than usual. Play aggressively, and you should have a decent chance of winning.

This is a control deck built around Lakkari Sacrifice. Because the Warlock's quest takes rather long to complete, the deck seeks to buy itself time with Corrupting Mist and Felfire Potion. Also, its mana curve is so high that it will use its hero power rather often. What makes this deck hard to master is that it only includes very few cards that actually discard cards. Because of this, success with this deck usually depends on your luck with drawing Malchezaar's Imp.

This is a variant of the Control Warrior archetype that includes Fire Plume's Heart. Its goal is to use its armor and its taunts to buy itself time until Sulfuras becomes available. Try to survive until your quest is finished, then stabilize the board with Brawl. Once this is accomplished, your hero power should eventually win you the game. The key to this playstyle is knowing what your opponent is capable of.