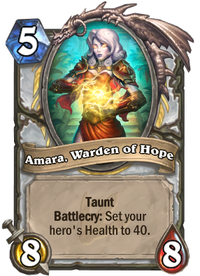 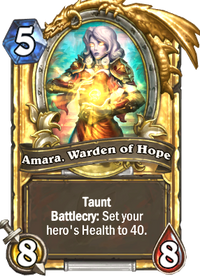 Amara, Warden of Hope is an uncollectible minion, generated by Awaken the Makers, from the Journey to Un'Goro set. 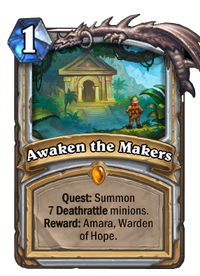 Amara's effect sets both the health and the maximum health of the player's hero to 40, regardless of what health total and maximum health the hero was at before Amara was played.[1]

For more notes on Amara's effect, see Awaken the Makers#Notes.

Summon
You are safe now.

Amara is unique to Hearthstone. She appears to be one of the titanic watchers charged with watching over Un'Goro Crater, originally created to serve as the "experimental ground" of the titans.

Titanic watchers (or simply watchers or sentinels) are the first generation of titan-forged. Most of them would later be tasked with the protection of specific places. The titan-forged were divided into the aesir, made of metal and masters of storms, and the vanir, made of stone and masters of earth. A few are also made of ivory. After they destroyed the Black Empire, they participated in the ordering of Azeroth along with their brethren.

Amara appears to be similar to Nablya, a titanic watcher and apprentice of the titan Khaz'goroth that adventurers encounter in Un'Goro in World of Warcraft.