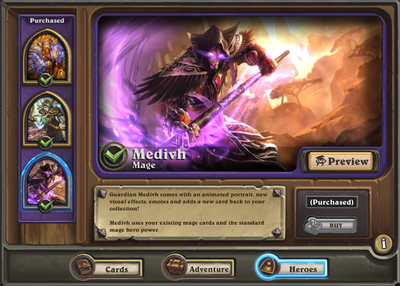 Alternate heroes are currently available for all nine classes (with Druid — previously the last class without one — having received Lunara as of the release of The Witchwood), with more planned for the future.[3]

Last Guardian of Tirisfal and former master of Archmage Khadgar, Medivh represents the mage class. A mighty sorcerer charged with defending Azeroth from the Burning Legion, Medivh was corrupted even before birth by the dark titan Sargeras. After helping Gul'dan to open the Dark Portal, bringing the orcs to Azeroth and beginning the First War, Medivh was defeated by his friend Anduin Lothar. However, years later he returned as a wandering prophet, helping to rally and unite the forces of Azeroth to fight against the Burning Legion in the Third War.

Alleria Windrunner is a high elven ranger and sister to Sylvanas and Vereesa. A peerless archer and representative of the hunter class, Alleria was head scout of the Alliance Expedition to Draenor. After destroying the Dark Portal, Alleria was forced to escape through a portal and disappeared with her beloved, the paladin Turalyon, to parts unknown.

Representing the warrior class, Magni Bronzebeard was king of Khaz Modan and thane of the dwarven capital Ironforge until he was turned into diamond during a ritual to reconnect to his race's latent earthen powers. Years later, he awakened from his long communion with Azeroth's world-soul, and set out to warn the other races of the impending invasion of the Burning Legion.

Representing the paladin class, Lady Liadrin is the leader of the Blood Knight order. Once a priestess of the Light, she became an errant paladin and seized power from the naaru after the Scourge destroyed her homeland of Quel'Thalas. She eventually sought redemption for her people, once more embracing the energies of the Sunwell, and now stands as a bitter enemy of the Burning Legion.

Representing the mage class, Khadgar is considered by many the most accomplished living wizard and was once apprentice to Medivh, until he was forced to defeat him when his master became possessed by the dark titan Sargeras. During the Second War Khadgar was sealed in Outland after destroying the Dark Portal from the other side. Khadgar has since returned to his role as hero of the Alliance, but is respected by the leaders of both factions for his work in coordinating actions against Azeroth's greater threats, as when thwarting the actions of Gul'dan and the Shadow Council on the alternate Draenor.

A respected elder of the murloc race and member of the Earthen Ring, Morgl the Oracle is a mighty shaman, to whom tribute is paid even by Thrall. Wise and learned beyond most of his kind, Morgl has been recruited by Sir Finley Mrrgglton to take up the mantle of heroism and rise above the savagery seen in most of their race. With an unparalleled control of the elements, Morgl can be persuaded to lend his power to the player's cause by a show of camaraderie.

Representing the priest class, Tyrande Whisperwind is former general of the night elf sentinels, high priestess of the moon goddess Elune, and leader of the night elves alongside her husband Malfurion Stormrage. After defending Azeroth against the Burning Legion during the War of the Ancients, Tyrande watched over her people while Malfurion and the other druids slept for over 10,000 years in the Emerald Dream. She later served as general during the Third War, before journeying into the Emerald Dream to save Malfurion.

Representing the rogue class, the legendary night elf warden Maiev Shadowsong guarded Illidan Stormrage for 10,000 years after his betrayal during the War of the Ancients. After he was freed and exiled, Maiev took it upon herself to hunt down the demon hunter, eventually chasing him to the Black Temple in Outland. After being captured and imprisoned by his duplicitous servant Akama, she was later freed and helped defeat the lord of the Illidari, imprisoning his disciples in the Vault of the Wardens.

Representing the paladin class, Arthas Menethil was the crown prince of Lordaeron, a member of the Knights of the Silver Hand, the student of Uther Lightbringer and a former love interest of Jaina Proudmoore. His determination to stop the Plague of Undeath from spreading throughout Lordaeron led him to commit increasingly desperate acts, culminating in him taking up the cursed runeblade Frostmourne and transforming into a death knight of the undead Scourge, after which he led the Lich King's forces in shattering the kingdom he had once sought to protect. Arthas ultimately journeyed to the Frozen Throne in Northrend and donned the Helm of Domination, becoming one with the Lich King.

Nemsy Necrofizzle is one of the most powerful warlocks alive. She is utterly fearless, sharp as a razor, and she's always cool under pressure. Nemsy loves it when her foes underestimate her. Appearances can be deceiving, and she knows that it's what lies beneath the surface that counts.

Representing the druid class, Lunara is the eldest daughter of the demigod Cenarius. While her fellow dryads embody peace and the serene beauty of nature, Lunara is a fierce defender of the wilderness who doesn't shy away from forcefully protecting the woodlands from mortal hands.

A mechanical version of the famed eredar Lord Jaraxxus, Mecha-Jaraxxus represents the warlock class. Mecha-Jaraxxus was rebuilt by Dr. Boom in Boom Laboratories for unknown (probably sinister, or at least crazy) reasons.

Created by a mysterious giggling tech in combination with Kangor's crystal technology, Sir Annoy-O is more than a simple Annoy-O-Tron. An honorary paladin, Sir Annoy-O uses his booming voice and boisterous greetings to rout the wicked, like the Headless Horseman.

Ancient ruler of the Zandalari Empire, the oldest and most powerful troll civilization on Azeroth, King Rastakhan represents the shaman class. Empowered by the Zandalari's loa gods, the father of Princess Talanji ruled Zandalar for over two hundred years, but recently, dark forces rising from within and without the empire forced Rastakhan into a dire pact with the death loa Bwonsamdi in order to protect his people.

A prophet of the Old Gods, Lazul joined Arch-Thief Rafaam in gathering a group of villains, forming the League of E.V.I.L. and plotting to rob the magical city of Dalaran. While Lazul's past is shrouded in mystery, the priest more than makes up for it with her visions of the future.

Representing the shaman class, Lei Shen the Thunder King rose from humble beginnings among the warring mogu clans with the ambition of continuing the work of the mogu's godlike titan creators. After stealing the power of storms from Highkeeper Ra, Lei Shen brutally enslaved the other native races of Pandaria to forge an empire that would last for thousands of years. Millennia after his death, the Thunder King was resurrected by his ancient Zandalari allies and sought to reclaim his empire, forcing heroes to rise against him.

Known as the brains The League of Explorers and one of the Saviors of Uldum, this skin depicts a much younger Elise. Before she became an explorer, Elise taught young night elves the way of the druid.