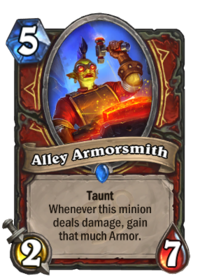 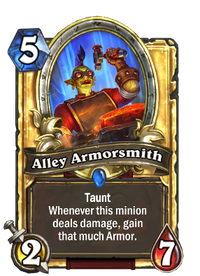 Taunt Whenever this minion deal damage, gain that much Armor.

The rent is cheap and she passes the savings onto YOU!

Alley Armorsmith is a rare warrior minion card, from the Mean Streets of Gadgetzan set.

Alley Armorsmith can be obtained through Mean Streets of Gadgetzan card packs, or through crafting.

Alley Armorsmith gains the most benefit when played against a Zoo deck. Due to the opponent's small minions, they will likely have to run into the Armorsmith with several minions to kill it, generating lots of armor in the process. It also works well with cards that buff health and attack, allowing it to survive even more hits while giving your Hero even more armor. Bolster and Stolen Goods are especially strong buffs.

When used with in conjunction with the regular Armorsmith, your hero gets armor even when the Alley Armorsmith was damaged.