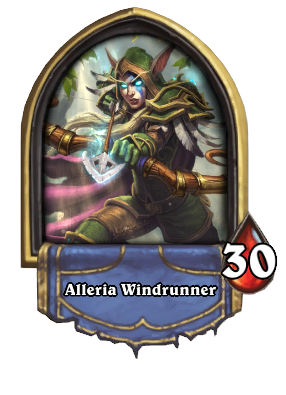 "Many believe magic has maintained order in Quel'Thalas. My bow would say otherwise. One shot, one kill. This is how I preserve our realm. I am Alleria Windrunner. If you stand against me, you're just another target. And I never miss my mark."[1]

Alleria Windrunner is an alternate hero for the

High elf ranger and sister to Sylvanas, Alleria Windrunner was head scout of the Alliance Expedition to Draenor. After destroying the Dark Portal, Alleria was forced to escape through a portal to an unknown world, and has not been seen since. Presumed - but not confirmed - dead, her location is an ongoing subject of speculation.

Alleria Windrunner is the eldest of the Windrunner sisters, all of whom have served Quel'Thalas and the Alliance with distinction. As well as her sisters Vereesa and Sylvanas, she also had a younger brother named Lirath. Alleria always wore a necklace given to her by her parents, an exquisite piece containing an emerald, a ruby, and a sapphire. She is also known to wield a sword with great skill.

Alleria Windrunner first earned renown due to the sheer number of trolls that she slew in order to defend her people's homeland, Quel'Thalas, during the Troll Wars. With the help of humanity, the high elves ultimately prevailed against the trolls. 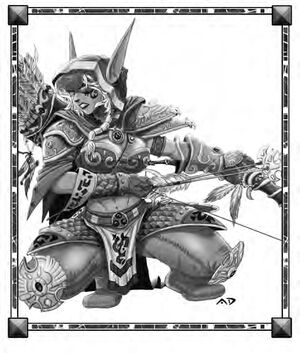 Unfortunately this would not be the last time that war would come to the high elves. During the Second War, the Horde burned down the borderlands of Quel'Thalas. The rampaging orcs killed Alleria's parents, but she and her two younger sisters, Sylvanas and Vereesa, survived.

Driven by grief and hatred, Alleria vowed that she would have vengeance. Her pursuit of revenge took her into human lands, where she led an elite cadre of rangers in hunting down renegade orcs of the Bleeding Hollow clan, who had been trapped on Azeroth after the end of the Second War.

The Alliance of Lordaeron had destroyed the Azeroth end of the Dark Portal in order to cut off further orc reinforcements from Draenor. However, the orc Ner'zhul and other Horde spellcasters used magical artifacts on the Draenor end of the Dark Portal, which was still intact. In this manner the powerful warlocks reestablished the pathway between Draenor and Azeroth.

The Alliance reacted quickly to the renewed threat and sent an expedition through the portal to Draenor. Having achieved the rank of captain, Alleria was part of the expedition, which succeeded in its perilous mission and destroyed the Draenor end of the Dark Portal. Horde forces on Azeroth were cut off from reinforcements and soundly defeated, and afterwards the Azeroth end of the Dark Portal was destroyed.

Alleria and the other members of the Alliance expedition shattered the Dark Portal on Draenor just as Ner'zhul opened a series of additional portals from Draenor to other worlds. Already weakened by the orcs' abuse of fel magic, Draenor began tearing apart under the stress of supporting the newly created portals.

As the planet shuddered beneath their feet, the members of the valiant Alliance expedition realized that remaining on Draenor would be suicide. Thus, they chose one of the new portals and entered it. They have not been seen since that fateful day.

Given the low likelihood of their survival, Alleria and her comrades are presumed dead, killed in the line of duty. They are honored to this day for their sacrifice. A statue of Alleria has a prominent place in the Valley of Heroes, just inside the gates of Stormwind City. 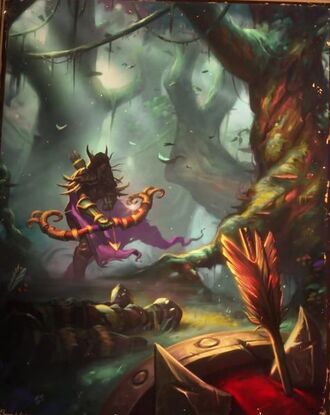 Alleria Windrunner is temporarily unavailable for purchase. The skin will be available again in the future.

Previously, as an alternate hero, Alleria Windrunner can be purchased using real money in order to be unlocked. Once unlocked the player can choose to use Alleria in place of Rexxar whenever playing with a hunter deck. It is not possible to purchase Alleria using gold.

Purchasing Alleria also unlocks a unique card back (see below), which can be used with any deck.

Once unlocked and selected for use, Alleria replaces Rexxar whenever playing with a hunter deck. Alleria comes with her own portrait, emotes, and hero tray art, as well as featuring a special animation when using her Hero Power, Steady Shot (or its upgraded version, Ballista Shot).

When viewed in the Collection, Alleria has the following flavor text:

The high elf Ranger Captain is a peerless archer. Ask any of the orcs she used for target practice.